Printing from computers goes through waves of being difficult to being easy, then back to difficult again. This is likely due to the cycles of technology, complexity and user demand flow in and out of sync. I think we’re at peak annoyance right now.

It’s even harder with Raspberry Pis, as when printer drivers support Linux, 90% of them are for x86 or x86_64 computers only (Canon: à² _à² ). ARM doesn’t get a look in. But one technology does actually seem to help: network printers that support IPP â€” Internet Printing Protocol.

We had an old Brother laser printer that just got slower and crankier and less useful as a printer, so yesterday I got a new Brother DCP-L2550DW to replace it. It says it supports Linux in the spec, but I knew not to be too optimistic with my Raspberry Pis. And indeed, it was seen on the network but no driver was found. I had a sad.

What turned my frown upside down was finding out about Raspbian’s cups-ipp-utils package. For desktop use, install it this way:

(leave off system-config-printer if you’re running from the terminal.)

Update: while you’re here, you might also want to install the print-to-PDF driver too. This allows you to print without wasting paper. Install it (and the IPP driver) with:

In many cases, this might be all you need to do: the network printers should be automatically found and added as devices.

On the desktop, open up Preferences â†’ Print Settings and add a new printer. Yes, it prompts for your user password which you may have forgotten. I’ll wait while you try to remember it â€¦

Now under Network Printers, you should see a device you recognize. Pick the one that says IPP network printer somewhere:

Here’s where the magic happens: you actually want to pick the generic driver for once:

And again, the IPP utilities package will have picked the right driver for you:

Changing the name and location is optional:

Hit Apply, and you should be printing!

(Hey, printer manufacturers have been known to be evil and make good, working stuff suddenly not work. IPP is supposed to make everything sparkly again, but I can’t guarantee that something wicked won’t come this way.)

Update: After a few months of using the Brother DCP-L2550DW, I don’t recommend you buy it. It’s a perfectly capable printer, but it takes â€˜chippedâ€™ toner cartridges that:

To get around (1), select Continue instead of Stop in the Toner Out configuration menu.

Update, January 2020: with sales and all needing a printer for work, the DCP-L2550DW will go with me to the office. I now have a MFC-L2750DW at home that scans to network, amongst other things. IPP proved it was magic yet again by the new printer being found and just worked with all my machines as soon as I added it to the network.

Three hours of frustration trying to configure a balky wireless router is better spent with a 15m Cat-5e cable fished through the cold air return.

My company’s network is down today. All of it. All my files are there. All my work is there. I’m enjoying freedom while I can.

Have you heard of a large company not having redundant servers?

The office network has been down all day. I don’t keep paper copies of anything. Therefore, today has been quite quiet, detached from everything.

What I really need is social metanetworking software. I can’t keep up with what’s the right network to be on …

BikeShare is no more, sadly.

I upgraded Catherine’s eMac last night, which up until then was probably the last Mac on the planet running 10.1. It now talks to the network better, and runs quite a bit faster.

wish I could have carried it out; there was a HP 5000 GN (huge network printer) marked out as trash on the same floor of our office.

I had a good day. There was a lot of administrivia, setting up e-mail accounts, form filling, and learning about the network, but that’s all once off. The afternoon was mostly spent fighting with my new BlackBerry (a 7130e, you nerds), which works as a very nice phone, but the e-mail isn’t set up.

My cube has a view, and the transit is great. I’m happy. 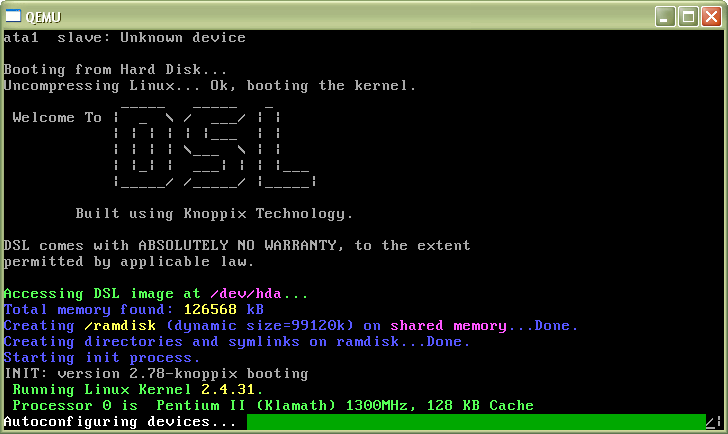 It opens up an X session, and passes through most system services — so I was able to print to my network printer.

I scored a refurbed LaserJet 4M+ from Centennial Computer Solutions for $99. Plug it in, connect the ethernet cable, set some things on the front panel — and I’m printing from anywhere in the house. I like.