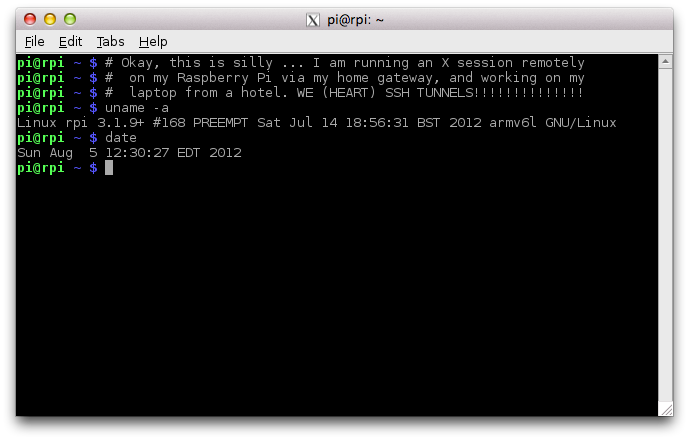 In a moment of boredom, I tried to bring up an X session on my Raspberry Pi from my laptop in the hotel, via the machine in the DMZ on my home network. It worked! It’s not very fast, but proves it can be done. The command I used was:

My home server went phut last week. There was a brief power outage, and everything else came back on — except the server. It was a three year old Mini-ITX box, and I’m casting about for ways to replace it.

To serve my immediate music serving and podcasting needs, I have pressed The Only Computer That Runs Windows into service, running Ubuntu using Wubi. Unfortunately, I do still occasionally need to run Garmin Mapsource, which only runs on Windows, and also The Only Computer That Runs Windows is also rather too nice a laptop to be sat doing server duty.

I have some options:

What I was really looking for was one of those tiny fanless internet appliance boxes that were so 2007 (like the Koolu and the Zonbu, both of which have moved on to other things), but such units, without the tied storage service contract, are upwards of $500.

My needs are simple:

I really also need to get rid of all the computer junk in the basement. It now includes two fritzed mini-ITX systems and the world’s slowest PostScript laser printer. Such fun.

MidpSSH on my Blackberry talking to a screen session on my home server running a bittorrent client (and no, this doesn’t mean that I was torrenting over a mobile network).

How did I manage to go for so long without knowing about screen? screen allows you to create several connection sessions to a terminal, switch between them, detach from them, then reconnect from anywhere. I’d previously had to to set up long-running remote jobs as background jobs, relying on nohup and various methods to prevent terminal output. But no more!

This page taught me all I know about screen: screen: Keep Your Processes Running Despite A Dropped Connection

I know the technology is not that nifty, but I amused and amazed myself by sshing into the home server whilst on the Via train somewhere between Smith’s Falls and Ottawa.

In short, it’s a beautiful day in Kingsbridge.

Kelly wanted the tetris shelves, but the cost was a bit steep. Her brother made these for her birthday.

The image links to a gallery of three views of the shelves.