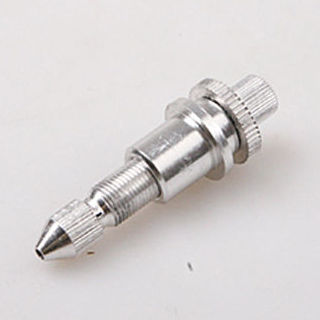 The one on the left is an unmodified pen holder. Well, it’s really a ballpoint-refill holder, as it comes with a (random colour of blue) refill.Â  To modify these to fit into an HP desktop plotter, you will need to: 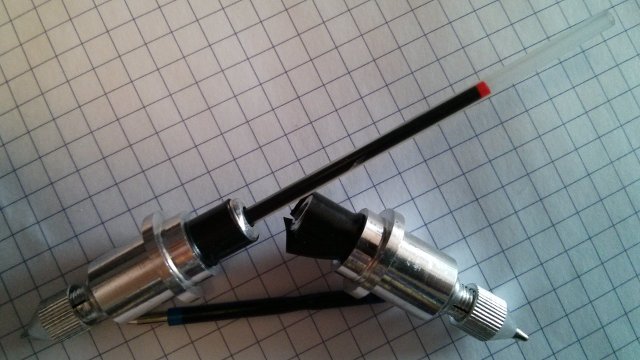 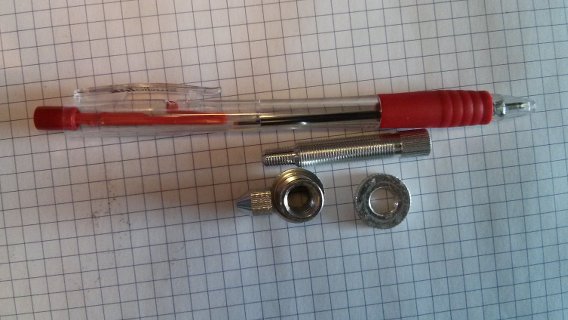 The lines â€” which should be a constant(ish) distance apart, if the paper has stayed in registration â€” are showing a varying distance from each other. It looks like the pen points are a little off-centre, so when the pen is swapped out, it gets turned to a slightly different position. This would really only matter for precise work, and I find the effect interesting.

As for the HP-GL viewer? GhostPDL, by the makers of Ghostscript. You’ll have to build it from source, and its documentation isn’t quite where one might want it to be, but it implements a full HP PCL6Â  / HP-GL/2 interpreter than can output bitmaps, PostScript or PDF. The SVG graphic below was made using the tools/plot2pdf.sh script to convert HP-GL to PDF, then I used ghostscript to convert that to SVG. Nifty!

My Harmony banjo arrived today. For something essentially made of plastic, with a brown-painted neck, it sounds great.

Got another banjo last night: an old Harmony Reso-Tone. These were the volksbanjos of the sixties, and though cheap, have a pleasant mellow tone.

The one thing I will have to get used to is its very narrow neck. But hey, if a “Steel Reinforced Neck” Reso-Tone was good enough for Lee Hammons …

I’m planning to put nylon strings on it for that backwoods tone.

I picked up these crayons at the GE Wind stand at CanWEA: 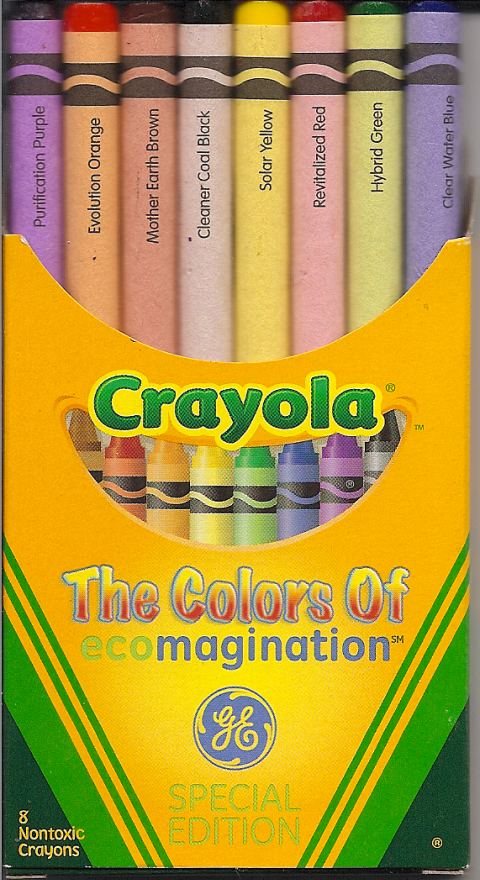 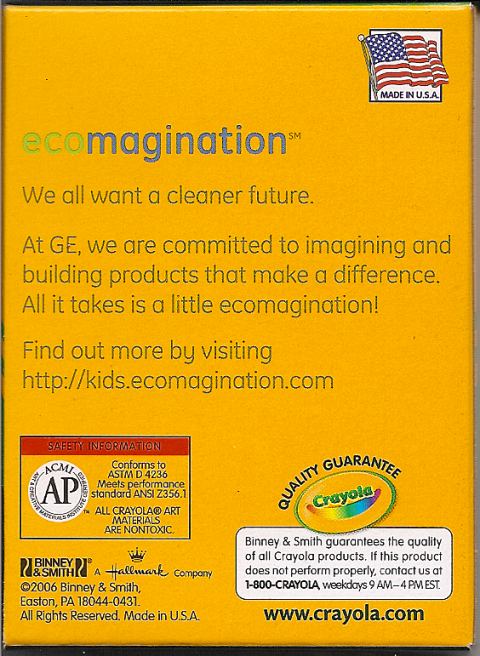 Is there a connection between wind power and crayons? Wait until I don my polyester leisure jacket, James Burke-style, until I tell you: Edwin Binney, inventor of Crayola, had a daughter (Dorothy) who married George P. Putnam. Putnam went on (with only a short detour into promoting then marrying the person for whom the word “aviatrix” is most often used, Amelia Earhart) to help create the Smith-Putnam wind turbine (itself perhaps the most heroically unsuccessful story in the history of wind energy).Wind turbines; crayons: it’s all connected, see?

Maybe I should’ve picked up a bunch of these at the show, as even a ratty package of them is going for over $30 on eBay. I’m glad that mine are already on their way to a 4 year old in Ohio, where they will be appreciated more than by any collector.

The RB-67 arrived. It’s colossal and heavy. It’ll need a CLA as the shutter release is sticky, but seems to be in okay condition for the price.

I’m selling my Garmin Geko 201 GPS plus extras on eBay (item 320106781450). I’ve been very happy with it, and the only reason I’m selling it is because I just upgraded to a GPSMap 60CSx. Dave has a similar unit, and I was very impressed with the way it handled routing when we drove around Vancouver.

Most of the reviews of the unit seem to be pretty on the mark: accurate location, quick acquisition, and an ability to find a signal with little or no skyview. While the 60CSx does appear to work indoors, it suffers from weird trackÂ  jitter.

I narrowly avoided buying an old Speed Graphic camera on eBay today. I regretted bidding almost immediately; film is a pain, and I’m glad I didn’t win. It would have been a nice ornament, but nothing more useful.

eBay.ca: music tapes 2nd imaginary symphony: one of Julian’s original CD-Rs is up for sale. Looks like it’ll go for over $100; eep! 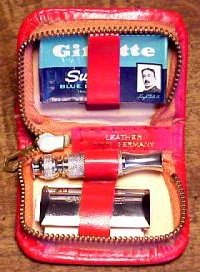 It is absolutely tiny, and it looks as if it has never been opened, let alone used. The blades are still in their cellophane wrapping, and the razor has its cardboard “blade” in place. I wonder how old it is?
The case doesn’t look very robust (it’s that cardboard leatherette that falls apart at the slightest use) but I’ll be able to shave in style anywhere in the world.

Published in 2001, Nippon Camera “Bessa World” mook (magazine/book). Produced to support the then newly-released Cosina-VoigtlÃ¤nder Bessa rangefinder cameras. Now out of print, this is quite hard to find. 128 pages, 210Ã—280mm, good condition.

Please note, this publication is written in Japanese. If you don’t read Japanese, it’s still an interesting picture book about the VoigtlÃ¤nder Bessa cameras.

I just scored a beautiful black Rotring 600 fountain pen on eBay. I have always wanted one of these. It writes beautifully.

ebay.ca seems to have great difficulty generating pages for Mozilla. I can have ebay.ca open on both Mozilla and Internet Explorer, and feed them the same URL. Internet Explorer loads it fine; Mozilla comes up with Page Not Responding.

This appears to be entirely repeatable, certainly on my Windows box. Try it for yourself; here’s a sample URL for camera tripods.