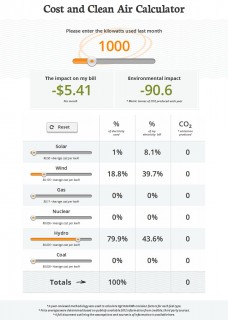 You might have seen the Bruce Power Cost and Clean Air Calculator. It’s supposed to show that nuclear is both cheap and clean, and using anything else would make your bills and your emissions go through the roof. Well, here are 40+ scenarios that all save money and emissions while using no nuclear and no coal:

Sure, some of these won’t be practical from a dispatch/capacity perspective, but hey, that’s Bruce’s issue to explain away.

I couldn’t have done it without this tiny routine to produce a list of random numbers that all add up to 1. No way was I clicking those sliders 10000+ times. Viewing the source was handy, though. 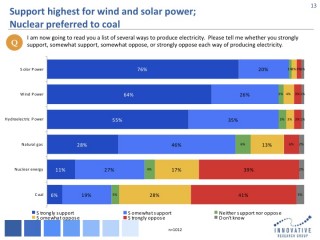 Poor nuclear power just can’t catch a break. The Canadian Nuclear Association commissioned a cross-Canada attitude survey, and — well, I guess people like nuclear power slightly more than coal, but worse than everything else. Which sucks to be nuclear, I suppose. 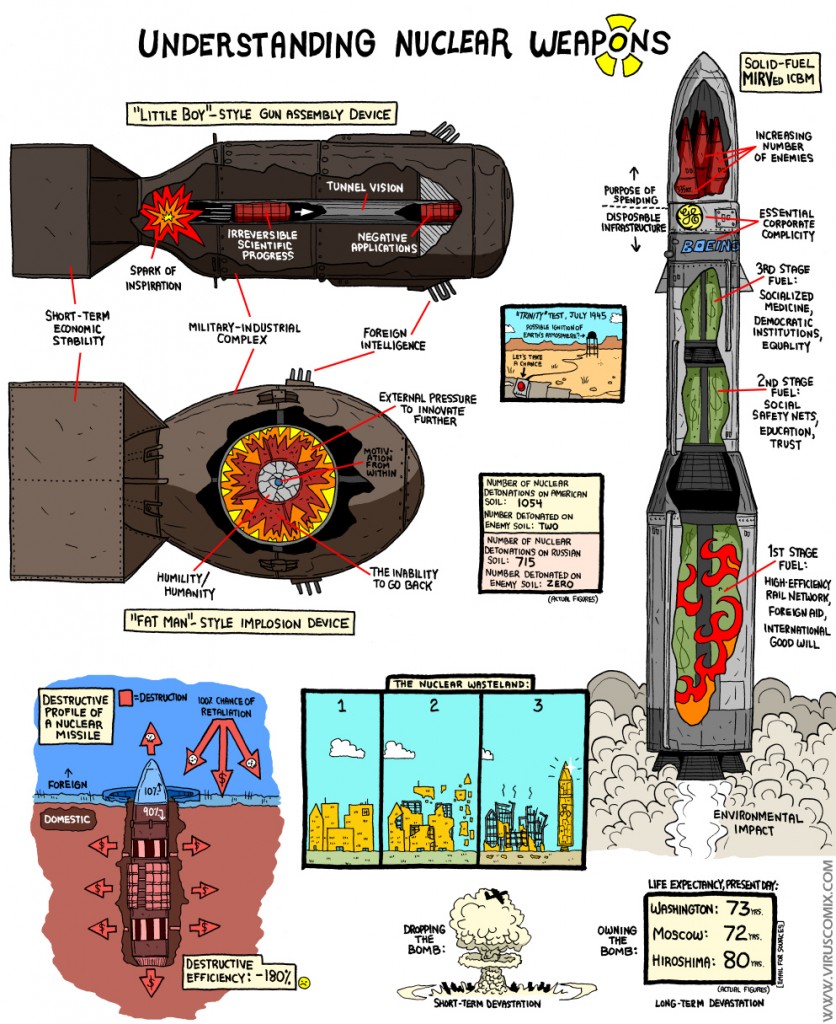 This looks like the engineers had far too much fun trying to find ways of damaging a small (simulated) nuclear reactor: SNAP rector safety tests

Generation costs/kWh for new nuclear (including fuel & O&M but not distribution to customers) are likely to be from 25 – 30 cents/kWh.

It’s a bullshit story. There is no issue.

You can still buy these here: WISE – Nuclear issues information service. I just ordered a bunch.
(The above image belongs to OOA and is used without their express permission.)

Find out more at the smiling sun, nuclear power no thanks site.

So there’s a new report on wind integration in Canada, written by The Conference Board of Canada. People are picking up on it, and even the doughty Refocus quotes “… electricity from onshore wind is uneconomic in comparison with traditional alternatives“. Hmm.

So I read the report, and what do I find in the Preface?

As part of an ongoing initiative to investigate energy policy options and the future of the Canadian energy system, the Canadian Nuclear Association contracted The Conference Board of Canada to conduct a comparative study of various countries’ experiences with supporting and implementing large-scale wind projects.

So we’re expected to believe that the CNA would wish to have an objective and non-partisan report written on wind power, eh?

(I can’t guarantee that Country Guardian won’t quote me out of context. I could make a cheap shot about not blaming them for their paymasters in the nuclear industry requiring value for money, but I won’t …)

Snowmass, Colorado, June 20, 2005 — Rocky Mountain Institute researchers today doused the hype about “nuclear revival” in an icy bath of real-world data. They documented that worldwide, the decentralized, low- or no-carbon sources of electricity — cogeneration and renewables, all claimed by nuclear advocates to be too small and too slow to help much with climate change — are already bigger than nuclear power and are quickly leaving it in the dust.

This problem was largely solved by the end of the program, and related work at Argonne National Laboratory looked like it could produce a lot of poo.

Can’t argue with that …

Yup, it’ll cost $4,000,000,000 to restore the Pickering nuclear power station to full operation. Oh, and five years, too. And all because of bungling management.

This isn’t just a day late and a dollar short. In 1997, the refurb was estimated at $780m and five years. Now, they’re saying more than 5× the cost and twice the time. Someone please nominate ousted OPG chair Bill Farlinger — author of such classics as The Commonsense Revolution and How to Privatize Hydro for Fun & (my) Profit — for the Giller Prize, since it’s Canada’s Premier Literary Prize for Fiction.

Look, I’ll make Ontario a deal. Give me the CAD 4bn, and I’ll give you enough renewable energy to make Pickering history. And I’ll only bungle on my own time. Deal?