Catherine‘s Insignia CD Boombox with FM Radio Model: NS-BIPCD01 (CD-player/iPod dock thingy) just stopped working. The traces on the power connector broke when it got bumped. It was a bit of a bear to open up. I was going to submit this to iFixit, but their editor is horrid. 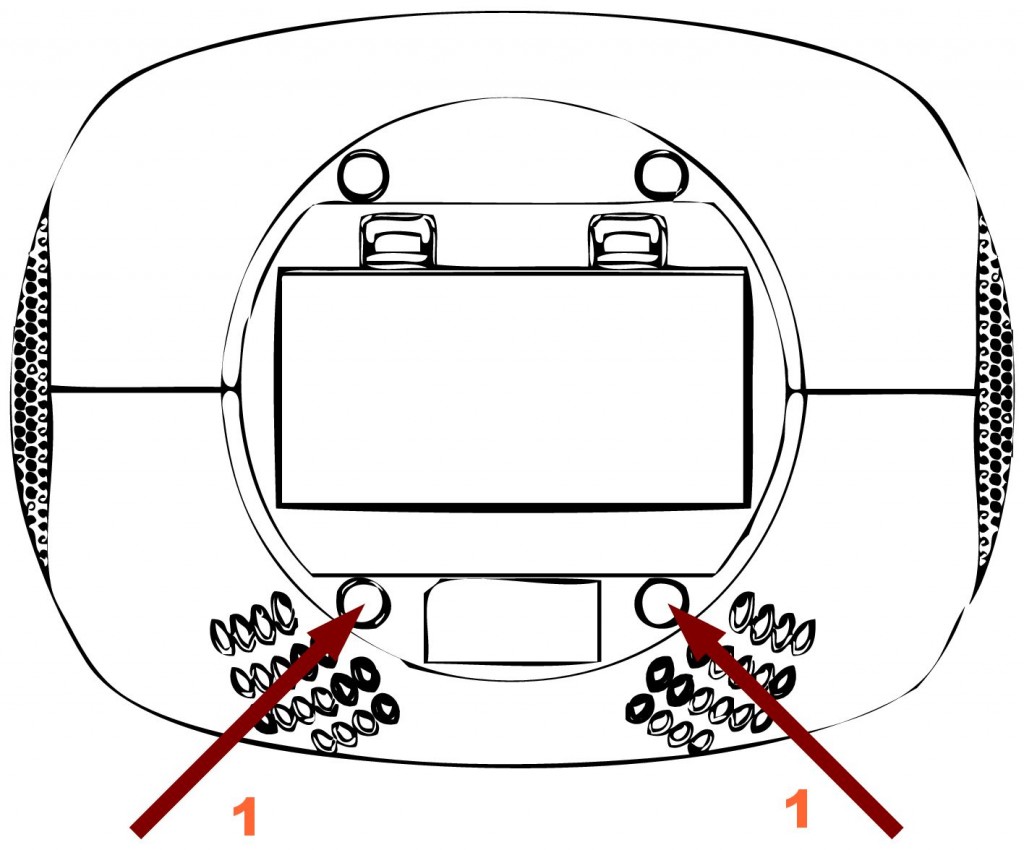 Underneath the device, peel off the two sticky feet next to the product label at (1). Underneath are #1 Phillips screws you should remove. These are countersunk, and should be kept separate from the other screws. 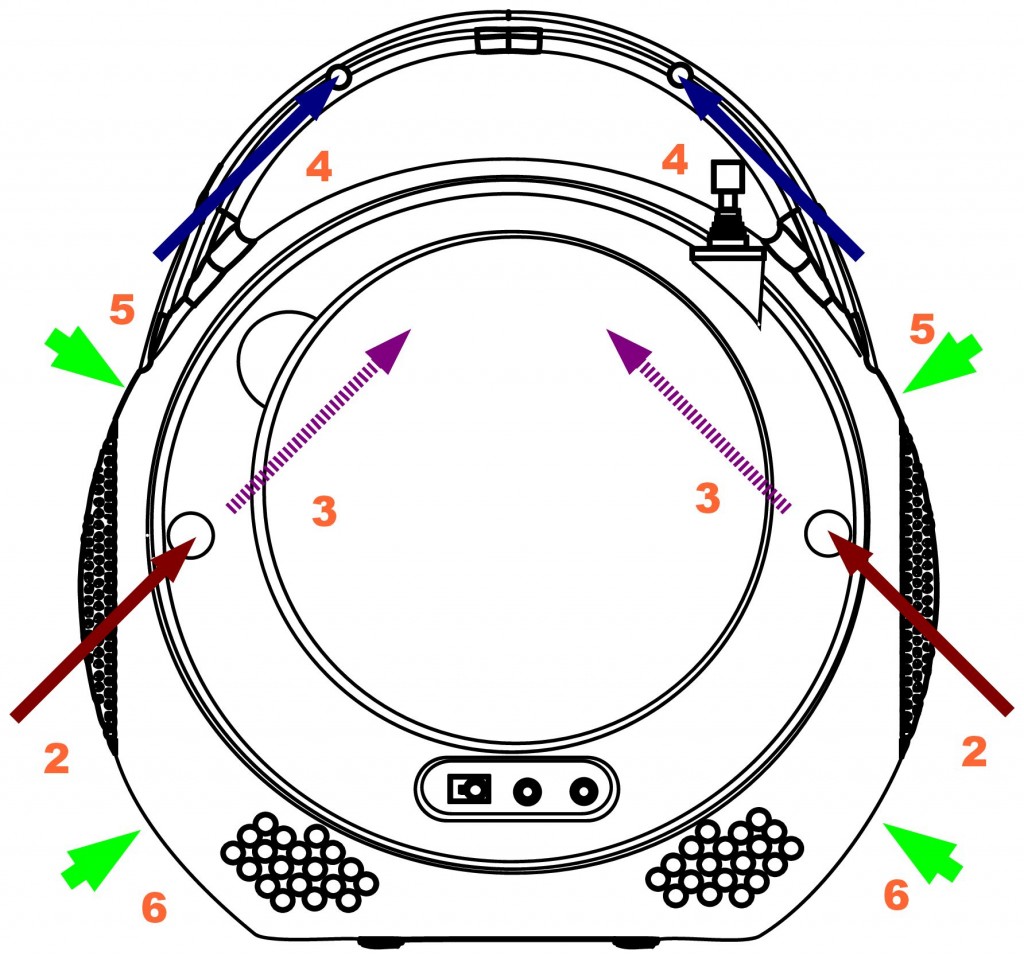 At (2), peel off the sticky covers and remove the #1 screws.

Remove the #0 screws in the handle at (4). We’ve accounted for all the screws holding the case together, but there are a couple of clips we’ll need to work on.

Starting from near the top of the handle, pry the two halves of the case apart with the guitar pick. There’s an insert in the handle which will fall out; keep it aside.

At (5) and at (6), there are clips inside the case which you’ll need to press on with the guitar pick to get them open. They’re quite fragile, and I broke two out of four. If you do break them, make sure the loose bits don’t rattle about the case.

The case should slip apart now, and there are several short cables connecting buttons, displays and power supplies. If you lay the box on its back (with the iPod dock uppermost) you can set the top of the case up on the main circuit board. This will allow you to get at the power/audio board, which is secured by two large-flange #0 screws. 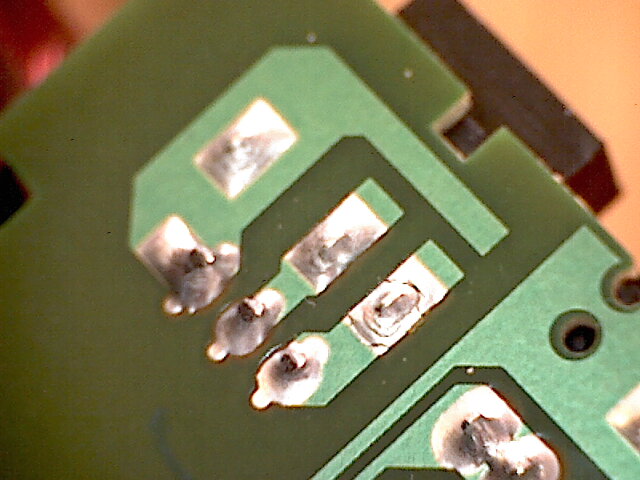 â€¦ and there’s the problem: the power trace (the lower of the three near the middle of the picture) has cracked. I re-soldered it, and also ran jumper wires between the pins. If this cracks again, the jumpers will be much more robust.

Because I can never find them when I need them, here â€” badly scanned for the Whole Internet â€” are the NordicWare Microwave Rice Cooker instructions [PDF].

In the Synthetic History of Canada, there was no symbol more evocative of hearth and home than the wheat board. Reconstructed here by the artist in the traditional materials of cedar [strength], wheat [abundance] and beeswax [cohesion], the wheat board is a forgotten part of Canadian lore. Its rediscovery as a domestic art form brings new hope of a progressive national identity.

Pretty much since the new year, I let me hair just go. This was mostly because I’d lost the coordinates for Arthur, the Scottish barber who first dealt with my hair in 2006, and I’d been following him from location to location. I have weird hair, and Arthur knew just what to do to make it behave.

A couple of weeks back, I was wandering idly along the Danforth, and after looking into a barber’s window, cursed the fact that I’d lost touch with Arthur. I walked a little further and — as if by magic — met Arthur. It seems he’s moved to the neighbourhood, so now we’re back in touch. The haircut I got on the weekend is awesome.

Arthur now does house calls (preferably near TTC stops), and is looking for some new clients. He’s been doing this for longer than you’ve (likely) been alive. I hesitate to post his phone number, so please contact me and I’ll pass on the details.

Â The above are static images of the installation.

END_OF_DOCUMENT_TOKEN_TO_BE_REPLACED

Human error may have led to outbreak | Special reports | Guardian Unlimited
Government officials believe human error at the private pharmaceutical firm Merial Animal Health is the most likely source for the return of foot and mouth disease, it emerged last night.

I scored a brand new, complete and unused Kelly Kettle for $4 from the Salvation Army today.

Kelly Kettles are a marvel of thermodynamics. Instead of lighting a fire under them, you light the fire inside the double-walled boiler. The tapered walls make the fire draw something fierce, and you get boiling water in a very few minutes. I kippered myself a bit making the morning coffee, but it was worth the effort.

I’m selling my Garmin Geko 201 GPS plus extras on eBay (item 320106781450). I’ve been very happy with it, and the only reason I’m selling it is because I just upgraded to a GPSMap 60CSx. Dave has a similar unit, and I was very impressed with the way it handled routing when we drove around Vancouver.

Most of the reviews of the unit seem to be pretty on the mark: accurate location, quick acquisition, and an ability to find a signal with little or no skyview. While the 60CSx does appear to work indoors, it suffers from weird trackÂ  jitter.

The GTA Bloggers will be meeting tonight on the second floor of Paupers Pub on Bloor, just east of Bathurst at 6:30 pm. Be there, or not.

For Groundhog Day, here’s my gallery of Groundhogs. It’s a shame that Gallery 2 mangled the thumbnails, oh well.

Leo Marks, on hearing of an old couple who died within days of one another, and were buried together:

We always treasured silences
In which we said everything
We shall continue to treasure them
And to say everything
Throughout the longest silence of all.

The 4000km holiday roadtrip is over. We’re back home now. It was good to be away, but it’s also good to be back. 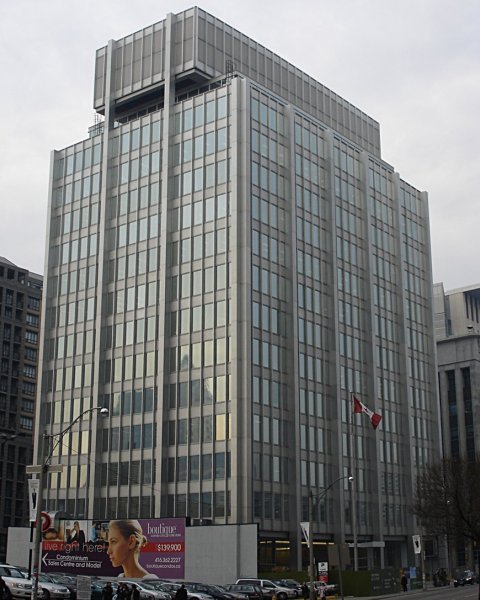 Work has just moved to a sweet suite on the 13th floor of 200 University Avenue. I have a lake view from my office window!

Uhoh, there’s a huge Canada Computers opening just up the road; next to this sign, in fact. I’m glad I no longer commute past it; the temptation would be too strong.

In celebration of leaving Vic Park & Sheppard, I guess I really must have one last burger from Johnny’s…