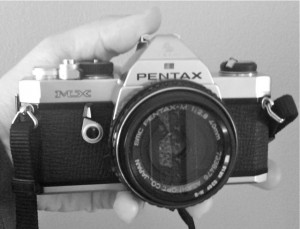 I missed my old Pentax MX. Of all of the cameras I’ve ever owned, it was probably the one with the most charm – and I don’t mean that in the same way that former Eastern bloc cameras were “charmingly” unreliable.

The MX doesn’t do much, but does all you need. It is tiny, but it’s a very solid chunk of metal. The shutter/mirror makes a very civilized little klipp! when fired. All the controls are where you’d expect them. The pancake 40mm lens gives my MX a snub-nosed appearance. I used to have the bigger and heavier 50mm f/1.4, which some lens nerds consider to be one of the finest lenses ever made.

Sure, it has its faults. The advance lever will poke you in the eye if you change shutter speed on the fly. And, well, y’know, film.