Seriously, Orriel Smith — yes, that one who was so earnest on Hootenanny in 1964 (it must’ve sucked to be alive in the early sixties, living in low-resolution black and white) and the two spaced-out tracks on Fuzzy Felt Folk — is definitely the best chicken-impersonating coloratura I’ve heard. She even gives the Cackle Sisters a run for their money.

The craving for second-rate chicken came over me. So I’m sat here in the chalet next to two couples who are having a conversation from two decades ago: how they drive out their way for Burger King, how the auto industry’s dying (but still a good place for a pension), bemoaning the lack of the Gardner extension, why recycling doesn’t work … and how John Tory’s a really nice guy who just can’t catch a break.

Just another Sunday night in Scarborough.

Read this. Oddly familiar, huh? It would seem that LiveJournal is republishing my blog on its own site http://syndicated.livejournal.com/wesawachicken/.

The thing about syndicated publishing is that the author has at least given permission that it takes place. I gave LiveJournal no such permission. Sure, I have a public RSS feed, but I don’t expect people just to grab my whole site and publish it for their own ends. That’s not syndication, it’s theft.
They also have the gall to claim there’s a “syndicated user” wesawachicken. Again, I didn’t set that up. I wonder if I can make it implode by getting it to syndicate its own feed?

Ritesh & Abhay introduced us to a great Indian restaurant — Mistaan, at 460 McNicoll. It’s mostly a Bengali sweet shop, but has a food counter. The chicken saag I had was great. We’ll be back. 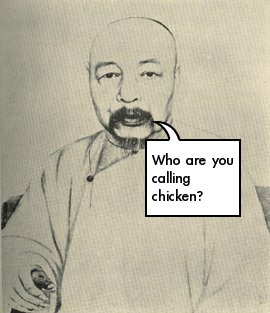 It’s a little known fact that General Tso’s Chicken does not celebrate Zuo Zongtang‘s liking for eating chicken. Instead, it commemorates his pet chicken (whom he named Maude) who travelled everywhere with him in a silk-lined portable coop of fine rosewood.

How much does it rock that my work is within easy walking distance of Roti Boys? Their jerk chicken paratha-style roti is full-on at all times. 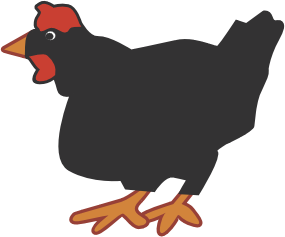 Like the new icon? I thought the Atari ST character set image of J.R. “Bob” Dobbs was getting a bit tired, so I found a suitable chicken-related image on openclipart.org. Seems to work in my browser, don’t care about yours.

I should really have used the Nong Shim Worried Chicken, but there’s too much editing, copyright and glutamate-consumption—condoning there.

Instructions on how to make a website icon for Unix users are from Matthias Benkmann, “How To Create And Install A favicon.ico“.

As a memento of actually seeing a chicken in Wingham, I decided to own the domains wesawachicken.com and wesawachicken.info. They both point here.

Democracies depend on the political participation of its citizens, but not in the workplace

I got pointed at ihaveanidea.org by Caroline, who recommend it for a friend who’s looking for an advertising internship.

They have TV ad showcases on the site, and I found this New, by hotdogboy. It’s odd.

We showed this film to an audience and asked them what they had seen, and they said they had seen a chicken, a fowl, and we didn’t know that there was a fowl in it! So we carefully scanned the frames one by one for this fowl, and, sure enough, for about a second, a fowl went over the corner of the frame. … The film was about five minutes long. …

Wilson: We simply asked them: what did you see in the film?
…
Question: No one gave you a response other than “We saw the chicken”?

Wilson: No, this was the first quick response— “We saw a chicken.”