Spotted just north of Eglinton on the DVP. Some daffodils, too!

Catherine alerted me that there were baby groundhogs behind the S. A. Armstrong factory on Ashtonbee.

It’s back, merrily wreaking havoc with the new green shoots, but I’m just happy that it’s there.

A very rotund â€” quite possibly bulbous â€” groundhog has taken up residence in our neighbourhood: 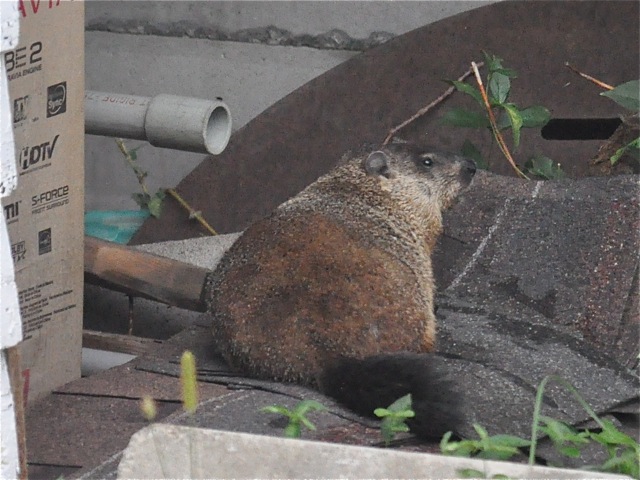 (the abandoned donut shop has quite a history)

I also saw and heard a woodpecker: local woodpecker.

Spotted by its burrow on the embankment of the 407 at Keele St.

Best present for Groundhog Day ever – the Apples in stereo‘s New Magnetic Wonder.

For Groundhog Day, here’s my gallery of Groundhogs. It’s a shame that Gallery 2 mangled the thumbnails, oh well.

Was up in Markham at Pacific Mall. Having a few minutes to spare, I went over to my favourite groundhog-spotting spot on Warden north of Dennison. Horrors! It has been landscaped, and all the burrows filled in.

I took far too many pictures of groundhogs today. I got some really strange looks from people waiting at the bus stop near one of the burrows.

To learn more about the groundhog, please see http://scruss.com/gallery/v/groundhogs/

On the rockery at the ex-Beaver Lumber place on Warden just north of Dennison. I used to see ’em here when I worked at Gandalf.

It was big, fat, and looked a bit grumpy.

Just after seeing this one, I saw another at a familiar haunt at Warden and Dennison. It’s springtime!

Off to markham, to are some of my old haunts. The sweetcorn and pumpkin truck farm is now buried under a mall. Gandalf Graphics is now a self-storage, after Larry Downey and the few remaining staff went to Total Graphics in Vaughan. Most of the fields where I watched groundhogs gambol are now building sites.

Is nostalgia supposed to cut in after less than four years? At least one thing remains the same; Markham Delight in the 1st Markham mall still does the best fried beef rice noodle you can get for $5. And that soymilk they have!

First I saw groundhogs on Ashtonbee, then we saw Bill the Pomeranian Guy in Yorkville. He had a whole bunch of pups with him, and these little critters were friendly, fuzzy and fearless.

But Wal-Mart Canada wants to build a huge ugly store on it. The area is zoned for properties up to 5600m2, but this store is more than twice that, at 12000m2 â€” and yet city staff are recommending approval.

END_OF_DOCUMENT_TOKEN_TO_BE_REPLACED

First sighting of one of the Warden TTC groundhogs today. That’s my official indicator of spring.

8:48 this morning, on the south side of the tracks about half way between Appleby and Burlington, I saw a groundhog digging. Though it’s still a bit parky (something like -6 Â°C), it does seem that winter might finally be on its way out.

The sight of groundhogs always fills me with more joy than it should. I mean, the idea that a terrier-sized rodent can still live in decent numbers in an urban environment with having been hunted out of existence, amazes this Scot.

Still, there’s a lot of weather to go by before we hear these guys again â€¦