Okay, so what’s this, just given its content warnings:

You must be at least 17 years old to download this game.

?
Sounds pretty nasty, eh? Definitely not something for the kids.

Wrong; it’s an ebook reader (specifically i2Reader). Just ‘cos Apple can’t control the content that you read on it, it slaps warnings all over it and makes you feel like a pariah just for looking at it.

I have, well had, a 2GB second-gen iPod Nano. Now I have a very slim brick.

When I upgraded to iTunes 8, it offered an update for my iPod. I let it do its thing, then resync’ed it. I noticed that the iPod rebooted after the sync — no big deal — but then kept rebooting (back and forth …) forever.

I tried resetting it; nope, it would just start doing its thing again.

In desperation, I tried restoring it on a PC, which needed to reformat the iPod. Partial success; it sync’ed music from the PC, but since my working music library is on my iBook, I had to restore and resync, and guess what? back and forth, back and forth …

I’d heard that the problem could be caused by empty podcast folders, so I cleared out and rebuilt my library, put the iPod into disk mode and restored it on a PC, resync’ed on the iBook and … back and forth, back and forth …

As a last try I’m going to fsck it under Linux. I might be stuck using yamipod, which is probably a bonus, as all I use iTunes for is as an iPod conduit. I really miss having a Rockbox-capable player, as it just worked the way I expected.

UPDATE: yeah, that last one did it. Shame about yamipod’s UI.

m4a2mp3 – convert AAC to MP3. Uses Perl, LAME and faad. Semi-gracefully converts weird iTunes genres to ID3v2, or to “Other” if it’s something else. Uses lame’s new VBR settings, so you end up with an MP3 not massively bigger than the source M4A. 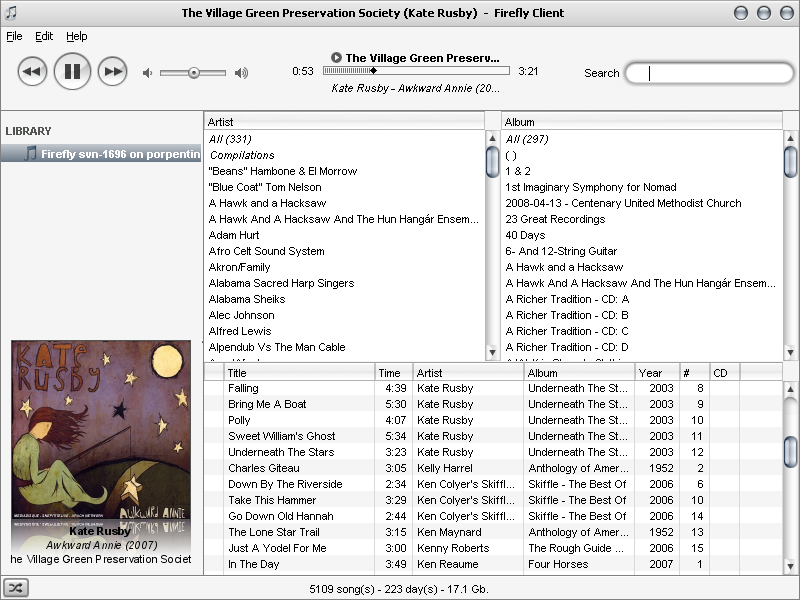 This is my work PC running Firefly Client, serving my music from home. Who needs to install and manage local music libraries now?

I just installed Firefly Media Server and it is good.

iTunes‘ clean/explicit labelling worries me. Shouldn’t I, at the age of Dennis the Communist Peasant, be able to decide what’s good for me? Not merely that, but it takes up a bunch of the song title entry, and they label songs by artists who don’t produce bowdlerised versions. Gah!

Shuffle mode on the iPod Shuffle isn’t random. It seems to play the same tracks in the same random order every time you restart the device. It only seems to get a new randomization when you sync with iTunes.

Oh yeah, and it’s too wide to fit alongside a standard USB plug on an iBook. I’ll check the BestBuy returns policy, ‘cos this thing just ain’t doing it for me.

There’ve been a couple of times that my 256MB USB key wasn’t quite big enough, so I was in the market for a 1GB unit. Since the iPod Shuffle was only slightly more expensive than a plain memory key, I thought it would be a good purchase.

Um, wrong. While it’s undoubtedly a decent (if slightly portly) USB key, it has huge deficiencies as a music player:

For me, I think the most the Shuffle will be is a way of listening to the couple of albums I’ve bought on the weekend. It is small, light, and sounds pretty reasonable, but it won’t replace my iRiver H120 for musical goodness.

In partial response to the Ask Metafilter question “How can I rename my music folders on my Mac based on ID3 tags?“:

So if you were in the terminal, in your music library (one up from the individual artist directories), and you did:

If that looks okay, run the output through the shell:

and all should be well.

You’ll need id3lib, which is probably most easily installed from Fink. Also, this only works for mp3 files; I can’t grok the tag info for AAC files. And finally, this might go seriously screwy on weird characters in filenames. You know my feelings on that …

Robyn Hitchcock‘s Mossy Liquor â€” a limited edition release of out-takes and weirdnesses recorded around the time of Moss Elixir, formerly only available on vinyl (ptui!) â€” is now available from iTunes Canada. Does this mean that it’s finally coming out on CD?

I found an album that I actually wanted and couldn’t find anywhere but on iTunes: Eelsâ€™ B-Sides & Rarities 1996-2003.

m4p2mp3 â€” helper to turn an iTunes protected M4P to an MP3, so I can play music I have bought on my MP3 player. Probably runs best on a Unix-like OS.

You will need Perl, some M4Ps, mono, FairKeys, DeDRMS, faad, and lame. You’ll need to edit the script to say where the DeDRMS.exe file is. You’ll need to have run FairKeys to pick up your account details from Apple’s server.

Does the conversion via WAV, so you’ll definitely lose something. As written, MP3 file sizes are about 15% larger than the M4P. Doesn’t handle invalid MP3 genres gracefully at all; there is the beginnings of a mechanism to do this in the code, though.

This script doesn’t know anything about decryption, and thus contains no code to circumvent DRM.

So I registered with iTunes Music Store. With the buzz I was getting from users down south, I was expecting it to be like my favourite indie record store, only online. Um, no.

So I searched for artists I’m listening to right now:

Ah, I see. It didn’t seem to have most of the artists I wanted. In all, it failed to find:

As you’ll be able to find at least five of these in the most dismal mall chain store, it didn’t start off too well.

I browsed the music genres, and was shocked. There was no folk genre, but there was a roots one which seemed to overlap what I’d call folk and world. Confusingly, there was also a world genre. Oh, and people, disney is not a genre, it’s more a malignant/cryogenically-preserved state of mind.

(I was amused to see the appaling faux yokel band The Wurzels listed as roots. I guess they are, if you know the etymology of their name …)

So I found a RobynHitchcock spoken word track that I hadn’t heard from Millennium Thoughts. I downloaded it, and on trying to play it, it said:

I thought that the pretty proprietary interface would at least remember that it was me logged in at the store, and using the same computer. I guess that’s how paranoid those DRM types are.

Once I was over that, I decide to buy a whole CD: XO, by Elliott Smith. Since I knew that the service used a propritary encryption scheme, I figured on buning a CD, and ripping it later. So I selected the tracks:

and started to burn a disc. But it assumed I meant all the tracks I’d downloaded into some “playlist”, so now I have a CD with one Robyn Hitchcock track, and all of XO. Annoying. Especially when iTunes doesn’t burn CD-TEXT information to the disc, grr.

I wonder why iTunes uses something very close to the radioactive symbol for the “Burn Disc” logo?

I’m not impressed with iTunes Music Store. The content is woeful, the user interface is contrived, and the tracks are very expensive, and in a proprietary format I can’t use directly with my MP3 player. I’ll be giving it a miss in future.

I can’t be very enthusiastic about Apple (Canada) – iTunes, which launched today.