So Dr. Blake â€œPROTODOMEâ€ Troise (previously) made a chiptune album that’s entirely synthesized by an Atmel/Microchip ATmega328P microcontroller in realtime. And every chip needs a PCB, right? So Blake released the album as a physical device you can solder up for yourself.

Of course, having the PCB lying flat doesn’t allow you to see Marianne Thompson’s great pixel cover art, or read the liner notes on the back â€” and risks having the circuit short out on random tinny things on your desk. (Maybe that’s just my desk, though.)

This stand allows you to display the board at a convenient 75Â° angle, but also allows the PCB to be flipped forward so you can read the liner notes comfortably. Yeah, I may have been a crate-digger at one time.

I love the ingenuity that goes into making very tiny projects do very big things. I also love chiptunes. So when I read the metafilter post about PROTODOME’s compositions for the ATtiny85, I was very much there for it.

The circuit to play this is no more than a $2 microcontroller, a lithium coin cell and a speaker or piezo buzzer. The microcontroller has 8 KB of program space and 512 bytes of RAM. The output is a single pin, but with very clever pulse width modulation tricks, sounds like three channels plus percussion.

The album is cool enough on its own, but Blake â€˜PROTODOMEâ€™ Troise has not only published the source code, but also written an academic article on 1-bit music: “The 1-Bit Instrument: The Fundamentals of 1-Bit Synthesis, Their Implementational Implications, and Instrumental Possibilities.” Journal of Sound and Music in Games 1.1 (2020): 44-74.

I remembered I had bought a tube of ATtiny microcontrollers a while back. I knew I had a coin cell and tiny speaker. â€œI can do this!â€, I thought.

So what follows is tutorial on compiling embedded code for an ATtiny85 microcontroller on Linux. There are larger tutorials out there, there are better tutorials: but there are also many out-of-date and misleading tutorials. This isn’t a general ATtiny development tutorial, but one specialized on getting PROTODOME’s tunes playing on your microcontroller.

The very minimum you will need to play the music is:

But that’s not all: you’ll need much more kit to program these tiny chips:

There are two separate toolchains involved â€” one to build the mmml-compiler to convert PROTODOME’s compositions to Âµc embedded C code, and another to compile that to ATtiny85 instructions. We can install it all in one go:

You can then run the compiler on each of the songs; the album title track, for example:

âš ï¸ If you get [ERROR 14] Too few channels stated! instead of Successfully compiled! it seems that the compiler isn’t too happy running on some 64-bit systems. I did all my compilation on a Raspberry Pi 4 running Raspbian and all was well. If you can’t get them to compile, I’ve pre-compiled them for you and they’re at the end of this article.

You should now have a musicdata.h file that contains all the tune data. Copy it to the same folder as the mmml-player C code:

That folder now contains the player and one tune data file. Now you need to compile it into AVR instruction to write to your chip:

The end result of what that just did is create a single small file mmml.hex containing the ATtiny85 program instructions for the 8+ minute track 4000AD. If you’re compiling for a different Âµc, you’ll need a different avr-gcc line:

If you find yourself compiling a few simple AVR projects but want to stop short of a fine-but-overly-complex Makefile project for AVR development, this script to create a hex file from a single embedded C source file might be useful:

In addition to creating a hex file, it also runs the avr-size tool to show you much memory your program uses. The 4000AD tune uses 98% of the ATtiny85’s 8192 byte program space â€” not quite enough to include that 14 minute extra bass solo, sorry â€¦

So now we do some wiring. If you’re using a dedicated programmer, use jumpers to connect its ICSP port to the ATtiny 85 like this:

Wire VCC to VCC, MISO to MISO, MOSI to MOSI, SCK to SCK, Reset to Reset and GND to GND. If you’re using an Arduino, you want to do this:

The wiring for that is:

Setting up the programmer: USBtinyISP

If you haven’t used one with your computer before, you need to do a little bit of prep so your computer recognizes it. These are modified from a gist:

Your system should automatically recognize the device and give you permission to use it without sudo privileges.

Setting up the programmer: ArduinoISP

To program the mmml.hex you created earlier, you’ll need one of these avrdude commands:

What all that means:

If everything went right with your flashing process, you should see lots of â€œavrdude: verifying â€¦ done. Thank youâ€. If you don’t, likely you missed a connection somewhere.

I already described all of the bits in the bill of materials in the Hardware section. If you want it in ASCII art, here’s all there is to it:

If you weren’t able to compile the tunes, I’ve included (with Blake’s permission) source for any AVR Âµc plus hex files for ATtiny85s here: protodome-mmml-examples.zip

Last but not least, there are a couple of tracks included in the source that aren’t on the 4000AD album. Blake gave me permission to include them here, too:

These weren’t recorded from a tiny speaker (that went badly), but directly to a Marantz solid state recorder. The rig’s the same as the playback one, with the speaker replaced by a potentiometer (for level control), a 100 ÂµF capacitor (to take off some of the DC bias and also to cut some of the very high frequencies) and a headphone socket. Have fun! 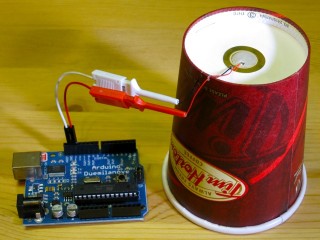