I might not have Amiberry â€” an optimized Amiga emulator for Raspberry Pi â€” running quite yet, but the build instructions at midwan/amiberry are a bit lacking. If you want to compile it under Raspbian Stretch, you’ll need the following packages:
sudo apt install libsdl2-dev libxml2-dev libxml2-utils libsdl2-ttf-dev libsdl2-image-dev
This will at least allow you to get it to build correctly with:
make -j2 PLATFORM=rpi3-sdl2-dispmanx
More later when/if I get it working. 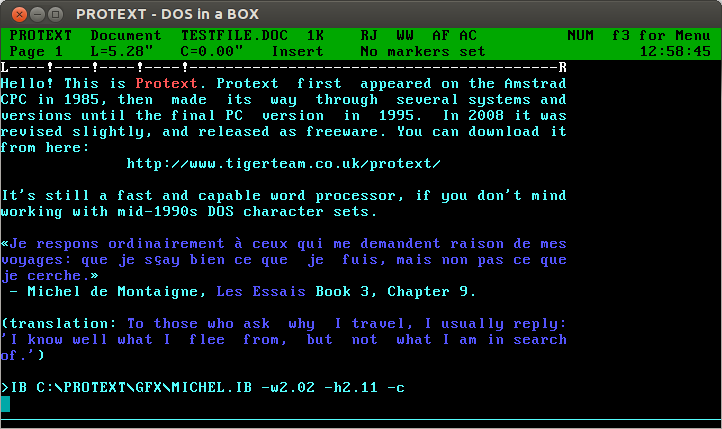 Oh man, Protext! For years, it was all I used: every magazine article, every essay at university (all two of them), my undergraduate dissertation (now mercifully lost to time: The Parametric Design of a Medium Specific Speed Pump Impeller, complete with spline-drawing code in HiSoft BASIC for the Amiga, is unlikely to be of value to anyone these days), letters â€” you name it, I used Protext for it.

I first had it on 16kB EPROM for the Amstrad CPC464; instant access with |P. I then ran it on the Amiga, snagging a cheap copy direct from the authors at a trade show. I think I had it for the PC, but I don’t really remember my DOS days too well.

The freeware version runs quite nicely under dosemu. You can even get it to print directly to PDF:

The results come out not bad at all: 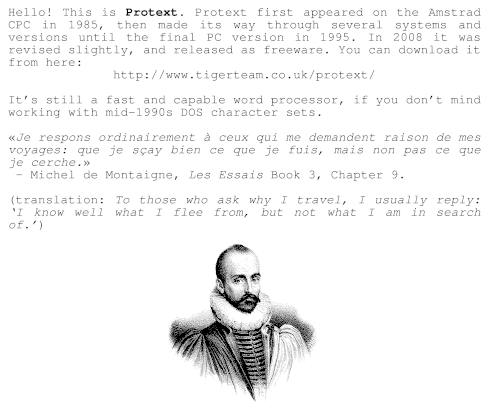 Protext’s file import and export is a bit dated. You can use the CONVERT utility to create RTF, but it assumes Code page 437, so your accents won’t come out right. Adding \ansicpg437 to the end of the first line should make it read okay. 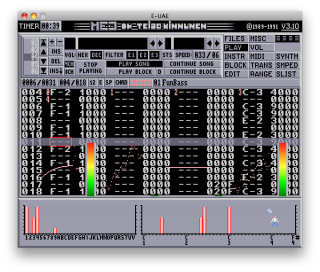 Multi-resolution screen? Check. Sprite-based VU bars? Check. Oscilloscope channel overlays? Check. Mouse pointer as a little dude who jumps up and down in time to the music? Check.

You don’t hear anything about ramdisks these days. What with intelligent OS file cacheing, we don’t really need them. Back in Amiga days, though, the RAM: drive was blisteringly fast. You’d put your small files there, and you could move them around really quickly.

Third-party ram disk drivers added features like the ability to survive a reset, and be more dynamic than C-A’s offering. The ASDG Dynamic Ram Disk was written by Perry Kivolowitz, who went on to win an Oscar for digital rendering techniques.

Emulated Commodore Amiga Games sounds like a good idea, but each game has to be sold as a separate app so the dreaded FEATURES of the computer aren’t allowed out. 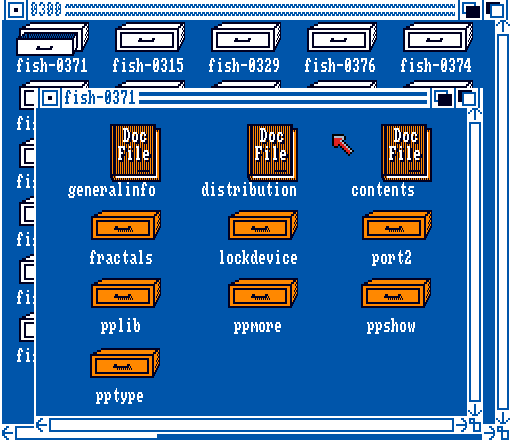 I just downloaded the first 1000 Fish Disks from Aminet. Back in the day, that would have cost me Â£3000, and would have involved serious floppy storage. As is, it took just a couple of hours.

I used to write for short-lived PD Shopper magazine. There was one flaw in the business plan; trying to sell a magazine to people who were naturally inclined to be cheap. As soon as shovelware CD-ROMs became available, PD Shopper vanished. 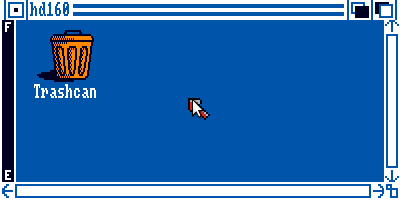 Dammit, E-UAE is fiddly to set up. I finally got hard disk images working, by doing something like this:

I’ve updated the drive images from yesterday, so you probably won’t need to format them.

I’m trying to get running an Amiga again, to see if I can remember what was rocking my computer world twenty years ago. I want to run that code, swim with the Fish disks, and generally muck about with what was my life back then.

Emulation is interesting. Variants of UAE (which came with an Amiga Forever CD set I bought in 1997 or so) rule the roost. Quality is variable – on Windows, WinUAE is very comprehensive, even making grink-gronk noises as the floppy spins. On Mac, E-UAE is really not worth the bother kinda okay – it doesn’t want to emulate anything above a 68000, and falls over quite often but has decent sound. On Linux, it’s plain and stable, and I happen to have an old Thinkpad going spare I can dedicate to emulation.

I would have expected all the old disk images to be readily available for download. It seems that the current owners of the Amiga name (this week, at least) still cling on to the old IP as if it has real value. The Amiga games market (which was the market) basically collapsed with Commodore in 1994. I really wonder who is buying the PowerPC based, vastly overpriced new hardware? For now, I’m relying on good old-fashioned torrent sites for my data.

I want to emulate two machines; the A500 I had for all my cringe-worthy magazine writing running Workbench 1.3, and a fast thing maxed out with all the processors and RAM I never had, probably running 3.1. While I did have Amiga[D]os 2.04 (can’t remember if they’d dropped the D by then), it wasn’t the main focus of my interest by then.

The biggest problem I have is getting hard disk image, even blank ones. UAE is picky. Here are a couple I formatted under WinUAE, both blank.

Update: yes, they should. I formatted them FFS under AmigaDos 1.3.

Got E-UAE running properly from a hard disk image last night. Tried to get the configuration close to what I had on my old 3MB A500. 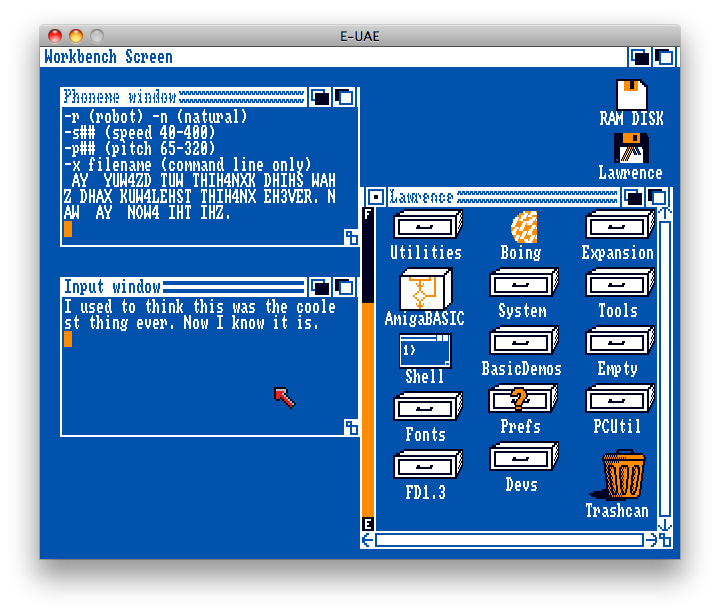 That retrocomputing itch … sometimes a guy just gotta rediscover the Commodore Amiga of his youth.