So, Netflix Canada launched today. As a (fairly) loyal Zip.ca subscriber, I was worried, but to be honest, I can do without putting DVDs in the mail every week. Since we can watch Netflix on the Wii, I thought I’d sign up for a trial month.

I tried to find things I’d want to see. Netflix is drawing blanks. I took my list of 30 movies I have queued at Zip to see how they compare. It’s not so good:

The unavailable titles at Zip are ones they know about, and will try to find. Not surprisingly, all of them are also not available from Netflix. The only ones I could watch at Netflix are October Sky and This Is England. And would you credit it, but didn’t the DVD for October Sky just arrive yesterday …

Look, I know it’s early days, but Netflix needs to get a bunch better in the next 30 days. Oh, and it could do with some CanCon – it’s very weak there. 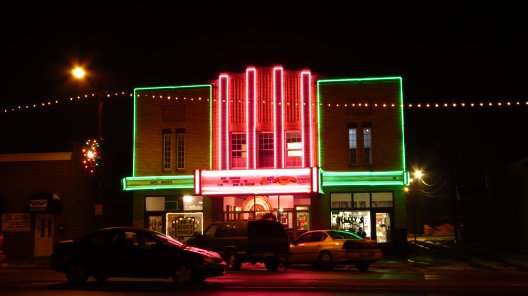 We just saw Hairspray. As the movie of the musical of the movie, it acquits itself quite well, but the edge of the original is lost under the sugar coating. I was about to add that we didn’t need a remake so soon after the original, but Waters’s version is 19 years old, which is an age in movie time.

The good bits? Nikki Blonsky is a wee honey, with huge cartoony eyes and a winning smile. James Marsden adds a little extra sleaze to the role of Corny Collins. The musical numbers are infectious; but then, they should be, coming straight off the stage.

The mediocre? Travolta’s face padding made his eyes look way too close together, and he’s no Harris Glenn Milstead. The cameos from the original are a little too cameo (didja catch Ms Lake as one of the talent scouts?), and the racist baddies are too bland to be disagreeable.

I recognized many of the Toronto locations: the high school’s on Spadina just north of College, most of Tracy’s neighbourhood was around Roncesvalles, the TV studio looked to be on Dupont, and yes, those streetcars were old Red Rockets (one even with an Eastern Avenue destination).Â  If you didn’t know Baltimore, you might think it passed, but it’s nothing like the real thing.

It’s a pretty good summer movie, charming and fluffy, but the original is still better.

I’m watching Jesus Camp; and it’s about the most alarming thing I’ve ever seen.

Spent a pleasant, if damp, day scooting around Vancouver and environs with Dave. After a quick tour of Granville Island, we headed off to the Museum of Anthropology at the University of British Columbia. We then had lunch at Fuel, which is extremely good.

We had to work off lunch somehow, so we hiked around Lynn Canyon Park, which includes the nifty and shoogly Lynn Canyon Suspension Bridge. Back at Dave & Leanne’s place, we decided on dinner and a movie, but I had to bail on the movie ‘cos my cold was getting bad.

Q: What is the little script-kiddy’s favourite movie?
A: 37

We saw Douglas Coupland’s Souvenir of Canada movie last night. We liked it a lot.

We saw Brokeback Mountain at the Cumberland this evening, and who should sit next to us but former governor-general Adrienne Clarkson and her posse.

I think she wanted our seats, as Catherine had got there early, and nabbed excellent ones; centre-row, 1/3 back.

In partial response to the Ask Metafilter question “How can I rename my music folders on my Mac based on ID3 tags?“:

So if you were in the terminal, in your music library (one up from the individual artist directories), and you did:

If that looks okay, run the output through the shell:

and all should be well.

You’ll need id3lib, which is probably most easily installed from Fink. Also, this only works for mp3 files; I can’t grok the tag info for AAC files. And finally, this might go seriously screwy on weird characters in filenames. You know my feelings on that …

Heartlands; a fine British romantic comedy, in that it’s neither particularly romantic, nor particularly funny. It’s a meandering vision-quest on a Honda C50 by a lovelorn darts-obsessed newsagent. But it’s got music by Kate Rusby, and Royd Moor wind farm makes a guest appearance, so it’s okay by me.

We’re just back from seeing The Hitchiker’s Guide To The Galaxy. It was a mildly amusing movie, little else.

I’m fairly old-school when it comes to HHGTTG. I didn’t catch the original airing, but did hear it when it was broadcast before the second series. Good old Radio 4 Long Wave, 200kHz or so. I saw the TV series. I read the books. I have the scripts book. I even had the towel; my brother got me a membership of ZZ9 Plural Z Alpha for a year (I didn’t renew; a bathtowel is a hard act to follow). In summary, I remember it as Paula Nancy Millstone Jennings, but know it’s really Paul Neil Milne Johnstone.

So basically, I have an image of how it should be. Yes, the radio series was quite different from the TV series, which was again different from the books. But to me the differences are its strength. It’s clear that Douglas Adams had an immense comic talent, and the spontaneity of a show that was written only minutes before (and sometimes, during) broadcast is dazzling. It was the genius of the contrived plot and deus ex machina saves that made it so fresh.

So a movie carrying the Hitchhiker’s brand is out, and a lot of people find it funny. That’s good; I’m a big fan of anything that improves the gross national happiness. But while it was funny, it wasn’t inspired. There were no producers tearing their hair out over the writer’s legendary inability to meet deadlines. Everything was safe, corporate. With a legend, when you retell it, you have to add something. This retelling added nothing; it was a mish-mash of bits from the cutting room floor.

Don’t get me wrong, the actors did their part well. It was a good spectacle. I even laughed at parts. But I can only agree with my friend David Inglis, an even longer-time Hitchhiker’s fan than I. After seeing it on preview, he summed up the whole film in one word: unnecessary.

We went to see The Corporation last night. If corporations were real people, most of them would be psycopaths.