Summer bugs by the crick at the Martha Lafite Thompson Nature Sanctuary. 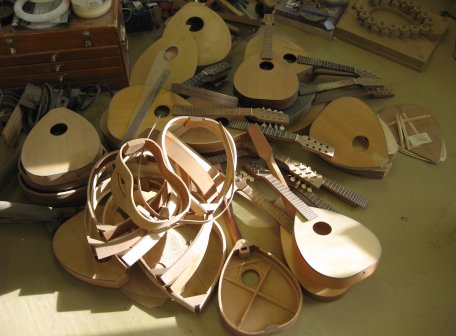 I spent a great couple of hours with Mike Dulak of Big Muddy Mandolins. Mike’s been making instruments for years, and is the largest industry in Rocheport. I caught him in the middle of moving his shop, so things were a little chaotic. The above pile of part-finished, discarded or otherwise parts summed up the state of the workshop as I saw it. And yes, that is a uke body.

Mike’s really refined his workflow. He’s built a nifty broach to cut all the string slots in a nut in one swipe. He has a fretting jig that cuts all the slots in one pass (hey, mandolin fretboards are quite short). But to make up for that, he shapes heel necks by hand using a rasp and sandpaper.

I’m really glad I visited, and makes my mandolin a little bit more special to know who made it, and see where it was made.

Lack of recent posts have been almost entirely due to this: 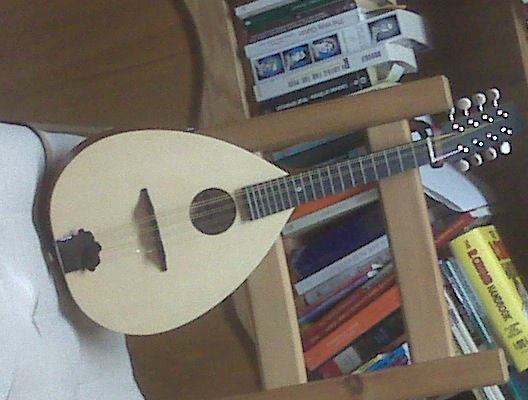 I really like the portability of the mandolin. I didn’t think I’d like the tiny scale (hey, its entire fretboard is only as long as 6 of my banjo frets), but it’s pretty comfortable. Way more so than a ukulele.

Can I just say that the road from Busch to Eureka Springs, Arkansas is the most gratuitously wiggly route I’ve ever driven?

Our route down from Kansas City was longer than I thought; place not blind trust in GPS routing, especially when you’re close to the edge of the maps you’ve uploaded. Due to one wrong turn on my part, we ended up in Overland Park, KS — rather than being on Hwy 71 all the way south. In future, I shall upload all the maps I need, plus all the states/provinces surrounding, so you don’t get that terra incognita/here be dragons feeling of falling off the edge of your wee scrolly map.

Unpacking and all. Guess what? I was selected to be the TSA’s Mr Random again! I detect a pattern …

Dave Raine said he’d take us to dinner at a fishing store. Woo, we thought; hot dogs and soda while he dug for bait. Ths isn’t the case when the fishing shop is the HQ of Bass Pro Shops in Springfield, MO. They have a fantastic restaurant, complete with cordon bleu chef. Who knew?

(and who knew that I’d end up with a fishing rod from there, either?)

I’ve just finished reading Jesse James: Last Rebel of the Civil War, by T. J. Stiles. A fascinating book, it describes the Missouri/Kansas border of the 1860s-1870s with the same level of horror as 1990s Kosova/Kosovo.

I know the area well. Catherine grew up in Liberty, and her mother still lives on Franklin Street, the site of the 1866 raid on the Clay County Savings Association by a gang including Arch Clement and the James brothers. The James family made their home in Kearney, the town which used to have my favourite diner, Clem’s Café.

After the civil war, veterans returned home with their weapons, and used them to settle old scores. Stiles makes the point that carrying handguns was rare before the war, so this is a possible root of the US’s gun crime problem.

But what struck me most was the amazing names that cropped up in the book: Adelbart Ames, Delos T. Bligh, Schuyler Colfax, Alvis Dagley, W. L. Earthman, Aber Gilstrap, Odon Guitar, Nimrod L. Long, Zerelda Mimms, Sidney G. Sandusky (who, coincidentally, built the house in Liberty that Catherine grew up in), Theodrick Snuffer, Flourney Yancey, and my favourite, Greenup Bird. You just don’t get names like that any more. These are solid names, they’ll see a lifetime through.

Just back from a busy but enjoyable trip to (and across) Missouri. Approximate timeline: