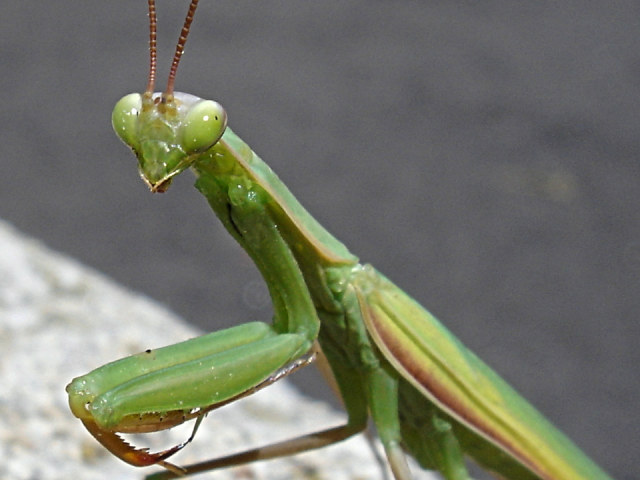 We found this praying mantis at the back of the office. Paul picked it up, but it flew off. It didn’t seem to mind having its picture taken.

This (my second) mantis sighting was much more interactive than my first. 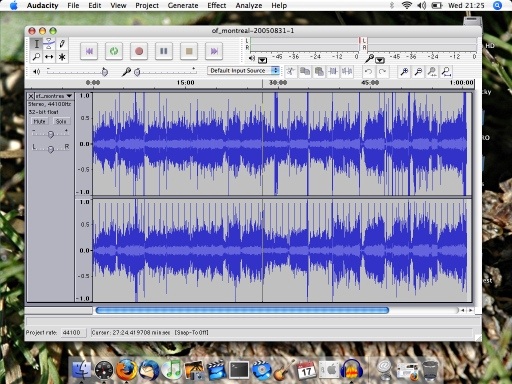 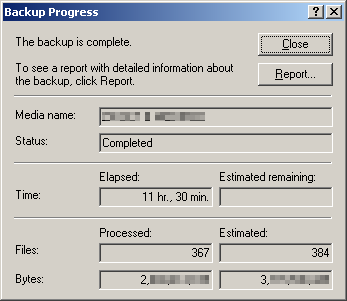 We use MS Backup. This is the typical output of a run which took — at the very outside — 90 minutes. Where it gets its figure of 11Â½ hours, I’ll never know.

I like animation more than Catherine does, so last night while she was teaching, I rented Harvie Krumpet. It’s a series of shorts by Australian animator Adam Elliot. All of them are poignantly strange. The main feature follows Harvie from his birth in Poland in the 1920s to his dotage in Australia. Bad things happen to him, but he abides.

If you can imagine Wallace & Gromit on mogadon, and imagine liking it, you’ll know how I feel about Adam Elliot’s work.

I like WordPress, but its image handling is pretty poor. I also like Gallery, but it doesn’t know how to talk to WordPress.

Here’s a quick way to get an image stored in Gallery into a WordPress entry:

The result is a small image in your entry which, when clicked, takes you to the main image in Gallery. It saves disk space, and it means you can use Gallery‘s excellent image tools.

So I think I’ve got all the old articles appearing at their old urls using .htaccess Redirect rules. This is a modification of a method described in the WordPress MT-Redirect method.

I had a directory of the old numerically-named MT archives, so I used the following script to create a .htaccess file:

I put this .htaccess file in the root (top level) directory of my domain, and it all works! Everything I set out to do when reindexing my old MT entries has been completed — see, lookit: http://scruss.com/blog/archives/000214.html

I’m not quite there yet, but I’ve got all my old MT articles with the same IDs as they had under that CMS. I basically used DrBacchus’ More about migrating from MT to WP method, but tried to integrate Scott Hanson’s Export from WordPress. It was not a complete success, but I’ll document what I did here in the hope that it’s useful.

DrBacchus was using an older version of MT, while I’m using the most recent version. I found that the file you have to edit to insert IDs is lib/MT/ImportExport.pm — not lib/MT/App/CMS.pm.

If you can avoid the temptation of adding blog entries to WP before importing from MT, do so. It’s a royal pain to add them later.

I used the WP MT-export module to export all my blog entries, then trimmed out the existing entries which had been entered in MT. I then added entry IDs to the export file (an awk one-liner: awk 'BEGIN{id=323;} {print;} /^STATUS: / {print "ID:", id; id++;}' worked for me, as my highest MT article ID was 322). I then joined the export files from MT and WP in one big ‘export.txt’ file.

If you have existing WP entries, you’ll have to get rid of them. I found that going directly into the database, and doing:

Don’t forget to patch import-mt.php as per DrB’s instructions before importing.

Here’s where the pain comes in â€” WP wouldn’t import the text from the entries created in MT. It restored all the metadata, but not the content. So I had to manually patch in the entries from the export file.

I still have to work out rewrite rules for permalinks, but at least everything’s on the server where it should be. Maybe John’s Moved To WordPress rewrite rules will help me, as I think that my host (1and1) may not be doing entirely halal things with .htaccess support.

I just got my blog working pretty close to the way I want it to be again. I should be back up and posting.

Big huge apologies to Catherine, with whom I was quite unnecessarily grouchy while this was not working. Sorry, Hen!

…. is that you can e-mail in blog entries. Like this one.

Okay, WordPress works now. I’m keeping the old MT archives for now, as there doesn’t seem to be a sane way of getting Apache’s mod_rewrite to work properly here. I suspect PEBCAK, probably, with intensely arcane rewrite rule syntax as a mitigating factor.

You’ll notice that the blog looks different. I’ve changed from Movable Type to WordPress. The latter is free, and looks more fun. All I need to do is work out how to reindex my archives.