What you can’t see is the smell of Halloween: the hum of charred turnip from the candle inside.

A Saturday morning queue for emigration ID photos on the Kirkintilloch High Street made me realise that Scotland wasn’t meeting the employment needs of its people. People in line were happily swapping stories of what they’d do after they’d had their photo taken, and departed for Canada, New Zealand, Australia or the USA. Although I was one of the happy band, it made me realize that Scotland was a country that people were lining up to leave. If the country you’re born in can’t offer you the best opportunities, it’s just not being run properly.

Scotland is part of the United Kingdom, not really by design, but by the coincidence of geography and 300+ year old expediency. Having provided England with a source of reliably non-Catholic monarchs the century before, Scotland of the early eighteenth century was dirt-poor from an ill-advised foray into Central American colonialism. Of course a union made sense in that time of empire building. It worked as a union for at least a couple of centuries, but like any marriage where the parties grow apart, grow unequal, or grow contemptuous, it’s a union that clearly has a time limit.

Part of the problem of being a minority partner in any endeavour is representation. Even though the union is one of nominal equals, when one is only 10% of the whole there can be little chance of the smaller party’s needs being met. In my technical sphere, 10% is typically considered rounding error; you can conventionally ignore that small part and still assume the whole of the system is included in your results. With different social priorities than the rest of the union, Scotland â€“ sometimes a great nation in terms of its aspirations â€“ can’t meet the needs of the people who live there without local control and responsibility. No-one wishes to spend their life as rounding error.

Viewing the independence discussion from afar is an odd situation for me. Abstracted from the daily local squabbles, I can appear to be detached. I must also guard against having an overly fierce opinion of something that isn’t going to greatly affect my life in Canada, while those in Scotland will have to live through it. What is clear, however, is the strange imbalance in the campaigns: Yes is all fired up, with positivity and community support by the truckload. No seems curiously muted; no grassroots, all cold reason and no heart. To see the energy even in National Collective‘s online presence reminds me of Barrie’s rather sly compliment to his countryfolk: â€œThere are few more impressive sights in the world than a Scot[…] on the make.â€

Old JMB might have had less altruistic intentions with his words, but there is a great beauty in the energy of the pro-independence creatives making the idea of a new country. I just hope they’re backed with enough practical nous to get voters to the polls on the day, for that’s all that counts in a referendum.

The No arguments are leaden in comparison: Vote No Because That Bloke on the Telly Says So (remember, actors say the lines that people pay them to say); Vote No Because We [the UK] Love You, Please Stay (apart from sounding a bit creepy, haven’t they ever heard of â€œif you love someone, set them freeâ€ …?); Vote No Because You Won’t Get Access to London’s Lovely Jobs if You Leave (um, this appears not even to be a thing for all the Canadians who live and work in the US â€“ a border is not a barrier). There just doesn’t seem to be a positive way of saying No.

Not all of the Yes proposals are entirely advisable, though. The issue of oil is a huge distraction. It may turn out to be of more value to leave it there unexploited, as a source of long-term carbon store revenue. Many people also bridle at Alex Salmond’s bluff facility, and of his standing as a statesman, I’m not a fan. Where he does shine, however, in his ability to be a canny negotiator. Scotland’s going to need a ferocious advocate to fight its corner in any independence talks, and Salmond is just the right kind of bastard to lead this. I would not be too keen if he stuck around as El Presidente for any great time afterwards, though.

To say No seems to me to defer the inevitable, at a time when the ruling party of the Divided Queendom could turn vindictive if Scotland sticks around. A referendum would come around again and again, each time the arguments becoming increasingly more abject. Best to do it now, and not defer the hard work of taking responsibility for Scotland’s future. Would you prefer to shirk as if you’re stuck in the latter days of a bitter nation, or rather take on the role of building the country you want?

Swatrick Payze sure is the greatest thing since the last.

Like O Canada and The Star Spangled Banner before it, it’s a random midi file (grabbed from Midi files of bagpipe tunes: mercifully, does not autoplay) converted to RTTTL and played through a glued-on piezo.

As you may have heard, the historic dictionary firm of Chambers in
Edinburgh is threatened with closure by the parent company Hachette
Livre.

They intend moving the English dictionaries to London and the
bilingual Harrap titles to Paris, involving not just the loss of 27
jobs in Edinburgh but the end of a publishing tradition going back
nearly two centuries.Â  Chambers is a Scottish and British institution
dear to the hearts of word-lovers.

Yes, the advent of free resources on the internet has changed the
world of reference publishing, but it is far from clear whether all
options for the future of Chambers Harrap have been properly
considered in what appears to be a very drastic and possibly even
underhand move by Hachette.Â  I feel strongly we shouldn’t just accept
this as inevitable.Â  Hachette should be forced at the very least to
undertake a properly full and open review of the situation first, in
due consultation with the NUJ.Â  If you wish to join with others in
urging them to think again, you may like to sign the online petition
at http://www.ipetitions.com/petition/chambers-in-edinburgh/.Â  It only
takes a few seconds.

I’m in Fort St John, BC – which appears to be exactly 116Â° due west of the hills around Arrochar where I used to stomp around. It’s also the furthest north I’ve ever been in Canada.

The one that got away – Scotland on Sunday on Ivor Cutler.

A recent BBC news story from Scotland leads with:

Wind farms could cost Scotland’s tourism industry millions of pounds and hundreds of jobs, a report has warned.

But the findings of the report are much milder:

… OurÂ  overall conclusion is that the effects are so small that, provided planning andÂ  marketing are carried out effectively, there is no reason why the two areÂ  incompatible.

So it looks, as usual, as if the BBC is trying to make wind turbines look far worse than they really are.

I saw my first anti-MMP flyer today (a postcard from nommp.ca, which appears to be run by a trainspotter from Guelph) and it surprised me that there could be such virulent opposition to what is basically a good idea. MMP, or its local variant, has worked very well in Scotland. So I’m going to vote for MMP.
When the Scottish Parliament got going late last century, it had a proportional representation system from the start. It did allow some minority parties in – like the Scottish Greens and the Socialists – but in doing so more fairly represented the wishes of the Scottish people.

True, there were some unusual antics in the house at first from some of the Socialist members, but I notice that they are no longer represented. Act like a jerk, nobody votes for you again – that’s democracy.

I’m not sure about the rise of the Nats, and the Greens are hanging on by one member, but it seems to work, and ends the “3 years of doing the opposite + 1 year of campaigning” to which majority rule seems to devolve.

Strike Rochdale from the record books. The Co-op began in Scotland.
… the cooperative movement was born nearly 240 years ago in a barely-furnished cottage in Fenwick, East Ayrshire. (And it’s pronounced ‘fennick’, before you ask.)

Conclusive proof (if any were needed) that Scotland invented Unicode:

If you try to display a UTF-8 apostrophe on an ISO 8859-15 system, you get a reasonable representation of didnae, isnae and wasnae.

I’m not quite sure what to make of the Scottish National Party forming a minority government in the Scottish parliament.

(and although I’m Scottish, and Scotland’s about the size of a Wal*Mart parking lot, I don’t know anyone who uses the word leid for language. Everyone knows the right word is langwidge …)

Everyone says I don’t have a very strong accent, but I’m sick of being misunderstood. I have been offered Wild Turkey when I asked for water, and my house number – 36 – is a constant source of confusion. Bell got it wrong for a couple of hours when we first got our phone in 2002, and so the poor folks at 56 have been getting our junk mail ever since.

Last straw came during the last power outage. Toronto Hydro has an automated voice recognition system which first asks your postal code, then your street name, then the house number. It got the code and the street right, then assumed I was saying big ol’ 56 again. It took me right back to the postal code question, even after confirming it and the street name before.

Rather than going postal, I ended up having to slur out my mooshiest “thihrdheesihx” before it took it. C’mon people, consonants, consonants!

Hate to think what it’d have made of the Glaswegian ‘thehrty’, which my Gran always decried as “common” …

Daniel Aliangana is a medical technologist from Eldoret, Kenya. In 1994â€“95 he was studying at the Royal Infirmary in Glasgow, and living in the apartment blocks in nearby Sighthill. He recorded these tracks in his spare time, and gave me a tape before he left for Kenya.

Trendy roof turbines are not as green as they look says The Observer. <smugness/>
Paul Gipe has some thoughts on this:

The last one has a couple of pictures I took when we were in Scotland.

Scotland beat France 1-0 yesterday. Here are some Scots enjoying the health benefits of smoking in the drizzle: 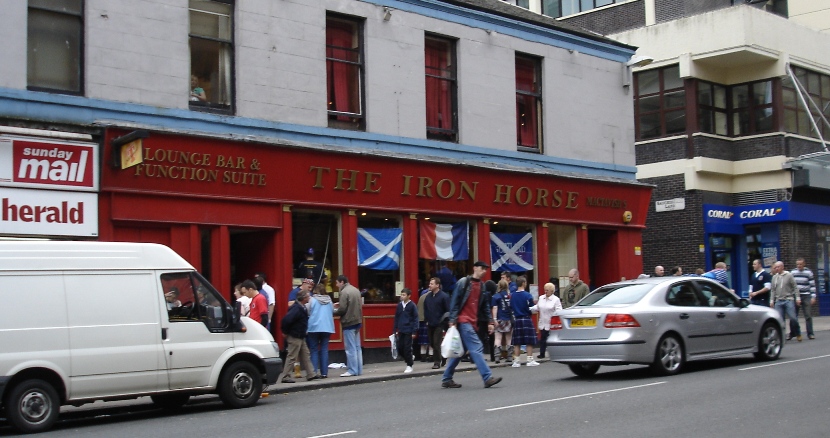