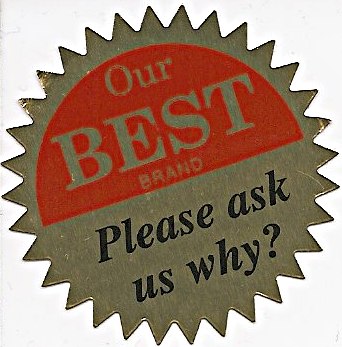 I guess the market for cassette tape head cleaners isn’t huge any more, so I was a little surprised to see this on the only one that The Source sells.

Ever get one of those sales call-centre calls where you get some automated message before an operator picks up? We get a lot of those, and usually it’s fairly easy to tell they’re automated.

The one I just got was somewhat lacking in clues of configuration: “This is the default message for the live person message.”

I so hung up on them.

I walk through a Ford dealership every day to and from work. Last Thursday, going home, my eye was caught by a tiny round black pebble dropping onto the hood (= bonnet) of a nearby car.

A salesman was near, and saw the pebble. He yelled at me, asking if I’d thrown it. I said that I didn’t. He didn’t seem mollified. I better watch out for him.