Yep, Marcus Gipps is at it again with a new Kickstarter campaign:

As part of my research into the JP Martin archives, I discovered both a biography of JPM himself, written by his daughter Stella Currey, and around 50 pages of unpublished Uncle stories which either didn’t make it into the finished books, or were heavily reworked. I’m now running a kickstarter to publish these two things in one volume of around 400 pages, which will be available in paperback, ebook or a limited hardback with the same specifications as THE COMPLETE UNCLE. The details are all here:

My latest kickstarter campaign, to publish a biography of JP Martin, creator of UNCLE, is now live!

If you’re able to back this new kickstarter, thank you very much – we’ve already hit our goal, but the more support I get now, the more copies I can print for the bookshops. And apologies if you’ve already backed, or have had this email more than once.

I am, of course, already on it like stink on Beaver Hateman.

I really never though I’d see this happen, but The Complete Uncle really looks like it’s going to get published.

For the last few weeks, I’ve been working on UncleWiki, a wiki about the Uncle books, by J. P. Martin. It’s a very rough framework right now, but I’m adding content as I go. Please join in!

I think Uncle stuck with me because of its combination of excess, gadgetry and eccentricity â€“ all of which are modes of being I have attempted to emulate in my adult life. I blame J.P. Martin.

â€” Will Self on the Uncle books, from the Telegraph’s Unsung Books.

Guardian Unlimited: Arts blog – books: The elephant not in the room: what happened to Uncle?

(Thanks to Mike for bringing this to liontower.)

Not all of these could be classed as banjo tunes, but I’d want to try, anyway:

Tony Bannister writes in liontower that James Currey gave him some tapes of J P Martin reading some of his Uncle stories. He hopes to restore the tapes and release a CD.

The following is chapter 2 of Uncle & Claudius The Camel, by J. P. Martin. It was published in 1970, is still in copyright, but is out of print. Uncle and his entourage are on holiday at Wolf Lodge in the run-down resort of Sunset Beach. The beach is plagued with biting fish called Blue Jacks, and Uncle has called on his ingenious American friend Ira Smoothy for assistance â€¦

Goodman spent all night chasing rats and mice, and yet in the morning seemed perfectly fit and full of good spirits.
Soon after breakfast the melodious sound of Ira Smoothy’s motor-bike horn was heard outside and Smoothy stamped in. He was a short, immensely broad man, with thick hair brushed up and large horn-rimmed glasses.
Happily General Boar always had breakfast in bed, so they could get straight to the point.
“Let me cook you a fresh breakfast,” said Miss Wolf eagerly. “No, no,” said Smoothy, polishing his big horn-rimmed glasses, “I’ll just have a few Seaweed Slashers.”
“It’s no good, madam,” said Uncle. “I’ve tried to tempt Mr Smoothy with all the delicacies of Homeward, but he always likes Seaweed Slashers best.”
“They suit me,” said Smoothy. “Now let’s get down to the pier, and I’ll show you what I propose to do about the Blue Jacks.”

END_OF_DOCUMENT_TOKEN_TO_BE_REPLACED 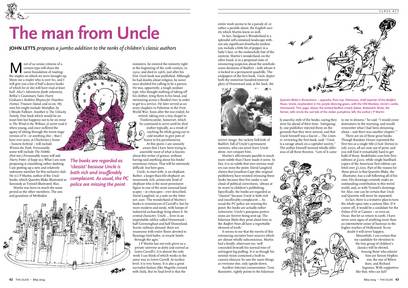 My favourite elephant got a good writeup in The Oldie, a magazine I’m not quite old enough to read. The PDF of the full May 2004 issue is currently online if you wish to read it.