Many people (such as 1, 2, 3, 4) cite the HÃ©limax study Analysis of Future Offshore Wind Farm Development in Ontario [PDF] as a good reason not to even measure wind speeds off the Toronto shoreline. I would be quite surprised if most commenters had read it, as it’s not a light read, but there are three basic reasons that the report doesn’t apply:

So that about wraps it up for the HÃ©limax study pertaining to Toronto.

Others have commented that the low capacity factors of the Pickering and ExPlace turbines. Despite that fact that capacity factors for a given site are highly machine specific, there are some issues here too:

So put that lidar out in the lake, and let’s see what we’ve got.

There is a timid calico cat that lives in the wing of the Bandshell at ExPlace. There is no picture; I said it was timid …

WindShare‘s having a special general meeting tonight to discuss the following resolution:

Moved that the Board of WindShare recommends to the WindShare I membership at their general meeting of June 7, 2006, the merger of WindShare I and WindShare II for the purpose of entering into the activities necessary for the development of the proposed Lakewind Proposal.

This is quite an important step, and since I’m still in Pittsburgh, I’d hoped to vote by proxy. I was informed by the WindShare administrator that this wasn’t possible; the Cooperative Corporations Act does not allow proxy voting.
I’m annoyed by this, as it looks like WindShare is going to merge its capital with a 10MW project being built on a site with a 6.5 m/s mean wind speed. I wouldn’t develop a project on a site with this low a wind speed, so I asked the following of the board:

Can you clarify, please, that the vote can only be carried if a majority of WindShare members are present at the meeting? It would be grossly unfair if an important vote like this one was carried by a minority.

I would also like to have questions brought to the board, and if possible, the meeting itself. The LakeWind information package states that Bervie has “an average wind speed of 6.5m/s … making this an excellent site for Ontario”. I would not consider a site having this wind resource to be excellent, and it would certainly not be one that would attract a commercial developer. So my questions are:

So far, I’ve heard nothing, which makes me uneasy.

Tallking to the OPA today, it seems that WindShare doesn’t qualify for SOC because it’s behind ExPlace’s meter. Aargh!

Update: I got a call from the OPA; they were wrong. Grandfathered embedded generation such as the WindShare turbine will be eligible after all.

Okay, so maybe it’s a hydrogen gas station for a demonstrator fuel cell car, but it’s still a big ugly gas station. I think it spoils the lines of the park in which the WindShare turbine is cited. 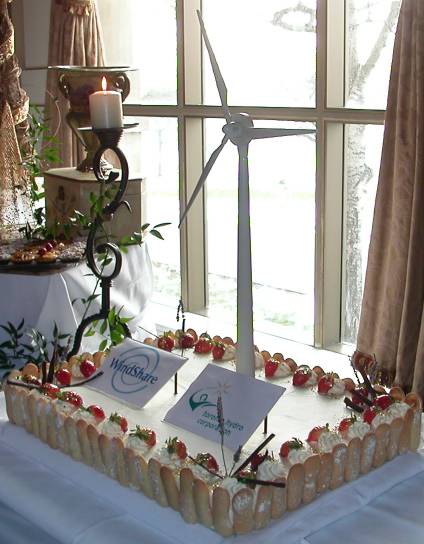 There was a big event at Liberty Grand at the CNE. The cake was particularly good.