If you want to work out how tall a wind turbine is at a distance, you can use simple proportion:

If I hold my thumb at arm’s length, it’s about a metre from my eye. The tallest a turbine would appear from shore would be equivalent to the height of the top joint of my thumb. That’s pretty small.

I would like to propose that the mandatory 5km shoreline exclusion be removed entirely, for the following reasons:

1 Drinking Water Source Setbacks
While the â€œTechnical Rules: Assessment Reportâ€1 of the Clean Water Act 2006 is cited as a major reason for the 5km shoreline setback, the assessment report itself provides for no greater setback than 1000m from a water intake in a Great Lake. It is suggested that this one kilometre setback be maintained for existing and planned intakes, but should not be applied as a blanket distance for all development. To force a larger setback than the Act allows is to discriminate against wind energy and the industry.

Taking the particular case of Lake Ontario near Toronto, the water depth at 5km from shore is typically2 40-70m. This is far greater than is practical, and would require massive and costly foundations.

3 Noise
The proposed shoreline exclusion unscientifically precludes any project coming closer to shore. As your document states that noise guidelines for offshore projects are in development, setbacks derived from these guidelines should be allowed. The document should also clarify that the 5km shoreline exclusion is typically larger than the setback required by the Noise Guidelines for Wind Farms3, as at a recent MOE session on Low Frequency Noise Measurement4, representatives of â€œThe Society for Wind Vigilanceâ€ stated that 5km was now the setback recommended by the MOE for all wind projects.

4 Positive Visual Enhancement
Wind energy is the most visual form of electrical generation, and it is a subjective matter as to whether the turbines are ugly or beautiful. The major shoreline constraint cited by the Ohio Department of Natural Resources is due to â€œaesthetic hindranceâ€5, yet the Great Lakes Wind Energy Center’s Final Feasibility Report6 wishes to site their pilot turbine as close to shore for â€œthe highest iconic valueâ€. Copenhagen, the capital city of Denmark, has an arc of wind turbines in the bay approximately 3km from the shore, and less than 5km from the Amalienborg Palace. By placing these turbines close to the city, they have made a statement of their commitment to sustainability, and avoided rows of pylons, which few (if any) could call anything but ugly.

I would hope that you would take my comments into account.

END_OF_DOCUMENT_TOKEN_TO_BE_REPLACED

There’s a bit of a stooshie going on in Ontario renewables circles about a proposed 5km minimum shoreline setback for offshore wind turbines in the Great Lakes. This pretty much kills most projects through infrastructure costs â€” deep lake foundations are expensive, as is submarine cable. Please express your opposition.

I’ve flown over Middelgrunden, and found it to be an icon in Copenhagen’s harbour. With some freehand tracing in Google Earth and some minor GIS skills (hey, I’m learning), here’s how much of Copenhagen is within 5km of the turbines:

That looks like quite a lot; lots of homes and tourist attractions, and not just the harbour. If you want a closer look, here’s the buffer in KML format: Middelgrunden-5km.kml.

I’m trying to find the location of the turbine 500m from shore at Hooksiel, but maybe it’s a bit new for Google Earth imagery. Fixed that for me: 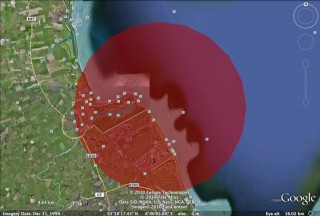 Many people (such as 1, 2, 3, 4) cite the HÃ©limax study Analysis of Future Offshore Wind Farm Development in Ontario [PDF] as a good reason not to even measure wind speeds off the Toronto shoreline. I would be quite surprised if most commenters had read it, as it’s not a light read, but there are three basic reasons that the report doesn’t apply:

So that about wraps it up for the HÃ©limax study pertaining to Toronto.

Others have commented that the low capacity factors of the Pickering and ExPlace turbines. Despite that fact that capacity factors for a given site are highly machine specific, there are some issues here too:

So put that lidar out in the lake, and let’s see what we’ve got.