I now have a 16:9 LCD monitor for the front room computers. The Ubuntu box needed a little reconfiguration of the X Server to work perfectly, though I think the bandwidh for 1440*900 might be a bit high for my old KVM, as I’m getting some sparklies on solid colour.

The mini-ITX box was another story. It resolutely refused to see the wider screen. Then I found out I had to update the BIOS. Yuk.

Since Catherine is of the teacherly profession, she bought a USB floppy drive with her iMac five years ago. The drive hasn’t seen much use, but it was essential here. First I had to find a floppy that worked (discarded a couple), then I found that Windows XP’s “make bootable floppy” option doesn’t actually make a disk that boots. I had to go off to bootdisk.com to find a super-minimal floppy boot image. Once I got that, I installed the bios tool and the flash image onto the floppy, and rebooted.

At this point I got really annoyed. The bios tool linked from all the VIA pages is too old to recognize the new bios file format, so exits with “It is not Award BIOS” error message. Once I found the right link (thanks, filupn), I was in business. Or was I?

I then discovered that my SP13000 had its BIOS protect jumper on. This meant dismantling the box. For most PCs, it’s not such a big deal, but for mini-ITX, it’s a horror. I had to remove the DVD drive, the hard drive, the PCI card and riser and many cables just to get down to the motherboard. Putting it all back together was hard, with the expected amount of squtcha, squtcha‘ing on the cables to get everything in.

The BIOS upgrade, the machine rebooted, and now all I need to do is update the graphics driver. Unfortunately, there are many that are described as the VIA/S3G Unichrome Pro Integrated Graphics Driver. Argh.

So my mini-ITX box arrived yesterday. Catherine was out this evening, so I set to building it. Can’t be too hard, I thought …

That was at about 19:30. You wouldn’t believe how hard it is to fit all the gubbins a computer needs into a box about half the size of a shoebox. It didn’t help that the Travla C138‘s case fan cable is too short to reach the SP 13000‘s fan connector. It also didn’t help that the DVD adaptor’s audio cable doesn’t look like anything I’ve seen (or have to hand). And it really, really doesn’t help that the volume of internal cables in the box is only very slightly less than the total volume of the case itself; judicious squtcha, squtcha‘ing on the ATA cables was required to get everything in. I can tell you, there’s not an earthly chance of getting a PCI card in there, unless it’s a very tiny one that doesn’t mind getting bent out of shape.

With much apprehension, I turned the system on, and stuck the Ubuntu liveCD in. Wouldn’t you know, it all booted fine: 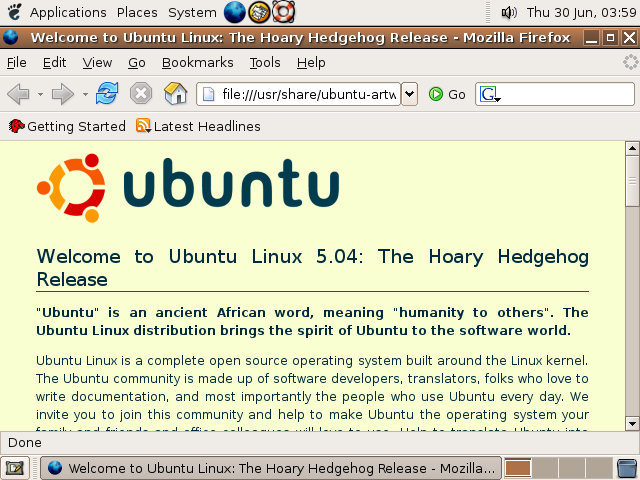 Sure, the resolution wasn’t great, and the timezone’s wrong, but I was expecting horrible POST feeping at best. All the hardware was found correctly, and the screenshot was transferred by USB key, which automounted to the desktop. Phew!

Thanks to Davey Laporte for the Ubuntu CD. It certainly saved my soy-bacon.