Probably best to retire my ad hoc image rollover in wordpress, as Ultimate TinyMCE has it covered. Sure, it’s a plugin, but it makes it so much easier. After uploading your two images, select an image and put the two URLs into the Mouse Over/Out fields: 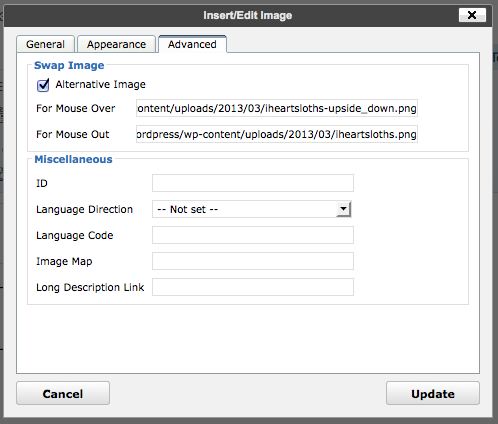 Easy! And no digging into the page source, either.

I’m seeing quite a bit of traffic to this post. I suppose I should explain that this was a quick hack to see if I could get image rollover to work on a friend’s wordpress.com hosted blog (and no, I couldn’t). This little example doesn’t do preloading, either, and I really don’t have any intention to develop this further. Sorry …

This does not work on wordpress.com hosted blogs; it gets stripped out.

Update: You probably want to install the plugin Ultimate TinyMCE, which does the job rather well.

(Actually, many years ago, I had access to the source of an extremely early wind farm SCADA server. It was written by a series of summer students, with variable names and comments in their native language. It was pretty hard to follow. One little nugget I did pry out of the code was that they used a simple arithmetic mean for averaging wind direction. That meant that it took the mean of 358Â° and 2Â° to be 180Â°; not so smart …)