I finally got around to transferring the first of the Robyn Hitchcock shows I recorded back in 2001 in Edinburgh: Robyn Hitchcock Live at The Assembly Rooms on 2001-08-03 : Free Download & Streaming : Internet Archive.

There are three more. Two of them (plus the one I just uploaded) have dropouts from dodgy Maxell MD media.

I did transfer these back in 2001, and distribute them on CD to several people. Audacity and a solid-state recorder makes this a lot easier. My old workflow was:

I went to hear Chris Coole yesterday at The Local, and got pressed into the not-very-arduous duty of looking after the levels. With only voice and instrument, it’s not that hard, and I only once managed to produce an ear-splitting blast of feedback. There was a slight ring if Chris leaned forward and his guitar started to feed back a couple of times.

I also ran my first soundboard-audience matrix recording rig, with the PMD620 recording off the board, and my old minidisc recording from my table. The Local’s not short of ambient noise, so it’s nice to control it. The board gives a clean but rather dead mono recording, while the audience mics pick up lots of colour (and dropped plates, door chimes, …)

I haven’t put the full matrix together yet, but tried it on one excerpted song. Once you know what you’re doing, aligning tracks in Audacity is pretty simple – just find a clear note or beat in each track, get the tracks roughly aligned with the Time Shift tool, then zoom in as close as you can to refine the match. I suppose I should have delayed the audience track by about 0.01s to mimic the distance from the stage, but that’s a bit nerdy. Limiting the audience to 25% of the final mix, I get a great warm sound, but one that’s unfortunately almost entirely monaural. 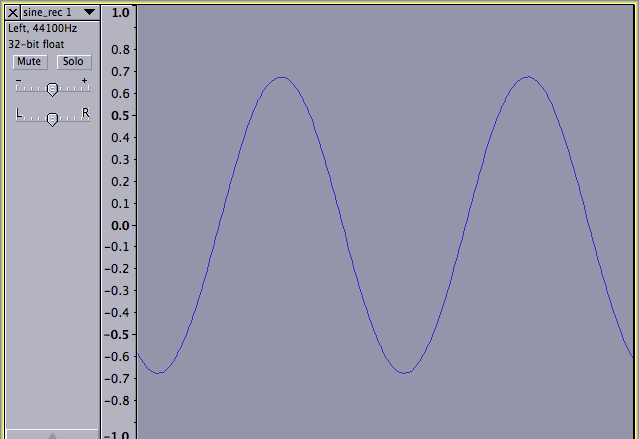 TheÂ  iMic seems to work with all Mac audio software as an input device. The free Final Vinyl recording sofware is pretty, but a bit buggy and annoyingly, only works when the iMic is connected. I just use Audacity, and have done with it.