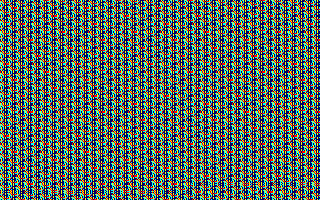 If you crash an Amstrad CPC, you often got some pretty patterns. Like the one above, which was supposed to print the alphabet, but got about as far as R, then started making coloured spots on the screen. My alphabet doesn’t (usually) contain coloured spots, so something went wrong.

This post is only about the Raspberry Pi in that it’s the nearest always-on Linux system that I have. This would likely work fine on any Linux machine. While the Z80 cross compiler I use (z88dk) is available in the repos, I can’t get it to build anything, so I just pulled down the latest version. To build the compiler:

This should result in a working environment. We can test it with a simple C program:

You can build it with:

You should end up with a file alpha.bin of approximately 4749 (!) bytes. You can copy it to a disc image using iDSK:

You can do the same with Z80 assembly language (shown here in the most gratuitously pretty Amstrad assembler, Maxam):

Although this results in only 11 bytes of code, it’s not portable; the C code above compiled and ran on both my Raspberry Pi and my Mac. It wouldn’t even run properly on a different Z80 system, as only the Amstrad CPC knows that call #bb5a prints the character in the A register. On the ZX Spectrum, for example, it was the completely different instruction rst 16 to print a character.