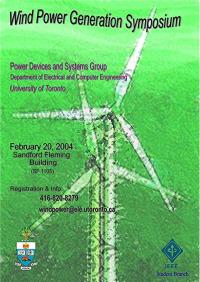 Yes, I’ll be speaking at UofT on 20th February.

I’ve had to close comments because someone comment-spammed the site. Having to deal with this is a bit like dealing with something unpleasant you’ve trodden on in the street.

My Palm gave up the ghost yesterday, less than a couple of weeks after fitting new batteries. I should have been suspicious of the remarkably cheap Duracell brand batteries I got from the corner shop. They are marked For Original Equipment ONLY.

A set of Duracell brand AAA batteries usually lasts me about two months. I wonder if these were some kind of pirated battery? 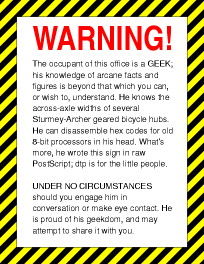 I wrote this back in my PostScript days. This is the source for the geek warning sign.

Go and see this. Best animation I’ve seen in a long time; it’s edging out “Spirited Away” for me. Fabulous score, and many wonderful tips o’ the beret to C20th French popular culture.

The Belleville residents look like refugees from The Quigmans. The structural gangsters in their 2CV limos are both menacing and comic.

Oh yeah, and stay for the end of the credits. 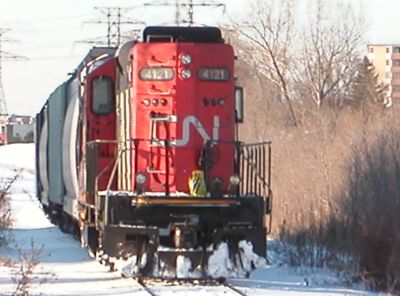 Something odd has started to happen on the CN freight link behind our house. Trains have started stopping on it for up to a day at a time, right next to the level crossing.

They stop with their engine running, so we have to deal with fumes and noise. I know it’s cold and all, and it would be hard to restart a big engine, but do they really need to keep this thing going for 24 hours in a residential area?

If you’re wondering about the title, that’s the sound that trucks, buses and other commercial vehicles make in British political cartoonist Steve Bell’s strip, If.

So I got re-elected at the WindShare AGM last night. Yay!

It’s the WindShare AGM tonight, and I’m up for re-election. There are four places, and five candidates. I hope I get back on, because there’s a lot we need to do.

Would you buy some fresh, green electrons from this man?

Stewart Russell is standing for re-election to the board of WindShare. After a successful year heading up the Technical Committee and hosting public meetings, he’s keen to get to work building more renewable energy capacity in and around Toronto.

Stewart is a long term advocate of renewable energy. After working on Fair Isle, where most of the power is generated by the wind, he was determined to work in wind energy. For several years he worked as an engineer for Renewable Energy Systems Ltd, one of Europe’s largest wind energy consultancies.

Car-free since 1996, he is committed to a sustainable Canada, and is pleased to see that an active Canadian renewables industry is growing. He brings considerable industry experience and engineering training to the co-op, and is dedicated to making WindShare a centre for excellence in community power generation.

I applied for an ISSN yesterday after reading Joe Clark’s ISSN for Weblogs page. This is what I got back from ISSN Canada today:

Thank you for your application. At the moment, we are no longer assigning ISSN to weblogs, but the situation is under review. The question of whether weblogs will be able to be assigned ISSN is under discussion in the international ISSN Network. The question hinges on the scope of the ISSN but also on the very real consideration of the limited staff resources of ISSN centres worldwide.

I guess it’s their ball and they can take it away if they wish. Blogs are serial publications, though, and therefore have all the rights of any regular publication.

I just signed up for Dexit, a direct payment smartcard thing that’s just starting up in downtown Toronto. It looks useful, if only to cut down the huge amount of small change I have.

The ergonomics of the card could be better. It’s about the width of a quarter, but twice as thick, so doesn’t fit well into your credit-card wallet. I think it’s supposed to go on your keyring, but I don’t often carry one. We’ll see how it goes. 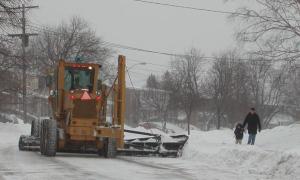 Yes, they use graders as snowploughs here. Then they have a JCB that follows behind to clear out driveways. You still have to clear out the wall o’ snow that’s left before it freezes, something I learnt the hard way last year.

Raise a glass of your favourite industrial solvent to the immortal memory of Scotland’s sodden-drunk poster-boy for good career planning — don’t farm rocky, marginal land if you’re more apt to compose poetry about whatever the plough turns over, don’t consider being a slave overseer in Jamaica, and — whatever you do — don’t be an exciseman if you have a failing for the hard stuff.

Both my parents’ families come from the same part of Ayrshire and the Stewartry that Burns knocked around. We’ve got a family story that an ancestor was once his schoolteacher. We’ve been able to prove that about as much as our theory that we’re descended from Scipio Kennedy, a West African slave belonging to the Cassilis family.

Oh, and you don’t want to know what’s in haggis. It’s truly offal. 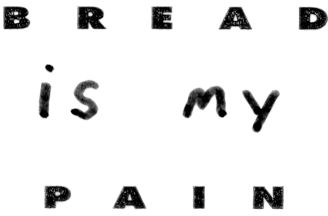 — from an Ace Bakery bread wrapper.

My Centre for Alternative Technology / Canolfan y Dechnoleg Amgen mug broke today. It had been my work coffee mug for over ten years, four jobs and two continents.

It shall not grow cold, as those that are left grow cold.

Today last year, the WindShare wind turbine was grid-connected, and exported its first kWh. We broke the 1,000,000 kWh barrier late last year, with hopes of many millions to come!

I just got the latest TUGboat, the communications of the TeX Users Group, and I’m a bit worried about how things are going in the world of TeX. TeX is a very powerful free typesetting system. I used it for my thesis back in 1992, and unlike any other wordprocessors from back then, my source files are still readable. I’ve been a TeXie ever since, landing a couple of jobs in publishing because of it, and spending a couple of years on the board of the UK TeX Users’Group.

What makes me worried is that they’re falling badly behind. The issue of TUGboat I got is dated 2002, even though it was typeset in 2003. The content is one large article, Formatting Information, by Peter Flynn. This article is freely available for download elsewhere, and while it’s a very good tutorial, and nice to have a paper copy, it does strike me that the TUG board are scratching about a bit for content.

A subscription to TUG is not inexpensive. Yes, you get the TeX Live CDs every year, but they’re an hour’s download on home broadband. TeX is a great system, but if I were subscribing as a new user, I’d find it hard to justify joining TUG.

According to the CBC, a Canadian has patented a method for extracting hydrogen from aluminium. While this patent has some extra specifics to deal with managing the reaction, it’s not that far removed from the old home science trick of dissolving aluminium foil in washing soda. Indeed, every box of washing soda I’ve used has come with the warning message above.

It takes a lot of energy to form aluminium from its various ores. According to an Alcan report, it takes over 15.5 kWh/kg to do this — that’s over 55 MJ of power per kg of metal. Smelting aluminium can also be massively polluting. I’ve heard tell that the smelting plant near Fort William used to turn the surrounding hillsides yellow from the fluorine emssions.

I haven’t done the sums properly on how much hydrogen a kilogram of aluminium will produce when reacted with caustic soda, but it’s probably going to be less energy than it took to form the metal. You’d also have to deal with disposal of alumina sludge at the end of the reaction, which is mostly harmless but bulky. There’s also a huge amount of heat evolved by the exothermic reaction, and thereby not turned into useful chemical energy. It’s a similar reaction those caustic soda/magnesium metal chip drain cleaning powders, and you know how hot they make the drainpipes.

This patent seems typical of many of the methods that are being thought up in our mad dash to a hydrogen economy; uneconomic, inefficient and ill-advised. But you can’t criticize it publically, ‘cos everything going to be running on hydrogen soon, isn’t it?

When scrmabled text, which was briefly popular in September 2003, meets up with Bayesian mail filtering, you get this:

I finlaly was able to lsoe the wieght I have
been sturggling to lose for years!
And I couldn’t bileeve how simple it was!
Amizang pacth makes you shed the ponuds!
It’s Guanarteed to work or your menoy back!

In other words, spam you can understand, but that your spam filter passes straight through.

I always thought it was a bit arrogant to assume that spammers wouldn’t almost immediately catch on to the limitations of Bayesian filtering. I’m guessing that spammers probably don’t like getting spam to their personal accounts as much as the rest of us do, so they’re probably using Bayesian filtering too. That means they too have access to a list of words with a high spam score, so they’ll know what to avoid.

So here’s a plan I call the Elitist Filter: reject a message if it has a certain number of spelling mistakes. While this would have problems if you received multilingual e-mail, it would have the serendipitous strong incentive for people to improve their spelling. And that can only be good.

I just restrung my banjo with Newtone strings. They sound great — really bright, with lots of sustain. They make my formerly rather shy Deering Goodtime much more outgoing.