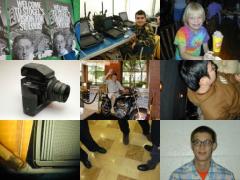 Digicams produce sequentially-numbered picture files. Every camera has taken a first picture, and quite frequently these pictures and their original file names make it onto the web.

Inspired by a conversation with James Dignan and Ken Weingold, the above is a collage of nine images originally named ‘dscn0001.jpg’ by the owners’ cameras. These thumbnails were found on Google Images, and have been scaled and tiled in a pseudo-random selection.

I don’t who these people are, or what the images are from. The selection and arrangement is arbitrary. The only thing that they have in common are the file names. Somehow, despite their differences, they are strangely related.