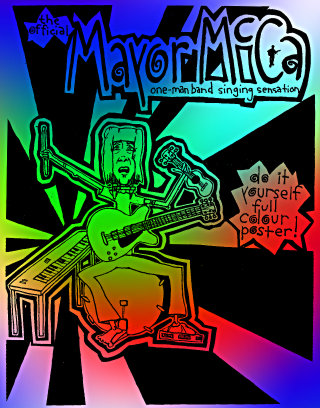 One-man band singing sensation. Tapdancer. Comic book artist. Sometime mayoral candidate in Hamilton Donut Rock City. Is there no end to the talents of Mayor McCa? Why is he unknown outside Ontario?

I was on the guest list for his show at Lee’s Palace on Friday. CA was on first, so there wasn’t much of a crowd. This is the first time I’ve seen him in his one-man band persona. Much fun was had.

I recorded the show with the Mayor’s permission. I had the files online, but took them off when I ran out of space. Let me know if you want to hear them.