For a reason best known to the Unicode consortium, there is now the symbol U+1F4A9 “Pile of Poo”: 💩. If you happen to create a web page with this delightful character in the title, Firefox does something special: 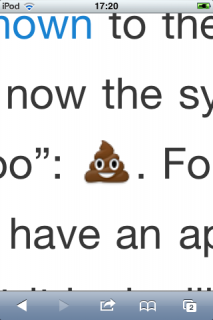 “Thanks” go to tchrist‘s comment in unicode – Why does modern Perl avoid UTF-8 by default? for alerting me to this character, and letting us know about the Symbola font that supports it. Yeah, cheers Tom …