Back in the mid-80s â€” right around the â€œcomputers are the future, innit?â€ phase of history â€” Strathclyde University decided that every student should have access to a computer. Unfortunately, the computer they chose was the Sinclair QL:

In UK computing, the QL is basically a punchline. With Clive Sinclair’s legendary lavish spending and attention to detail, it shipped late, was initially fiercely buggy, had a keyboard that was 100% nope and used microdrives (an endless loop of magnetic tape in a tiny cartridge) to provide occasionally-retrievable data storage.

My brother was at Strathclyde while these computers were available, so he plunked down the deposit and brought one home. It looked good â€” especially hooked up to a TV through its SCART port. But it didn’t have much software, outside the tools that were homebrewed for my brother’s course.

One piece of software that has stuck with me in the ~35 years since then was a fractal graphics creator. I remembered you could draw segments and overlay them on shapes to make geometric figures. I thought this was magic, especially with the QL’s (at the time) quite nippy 68008 processor.

I don’t know what prompted me to look for it today. I’d half-heartedly looked in the past, but found nothing. But today I remembered it was written by a software company based at Strathclyde, and that got me to the Talent Graphics Toolkit:

I remembered the â€œwindowedâ€ layout and even the pinstripes. Maybe the graphics were a bit plainer than I remember, but it still delighted me:

The emulator (uQLx) was not particularly easy to install, but I so wanted to run this again that I persevered.

By the time I got to Strathclyde a few years later, the QLs were history. It was rumoured that there was a storage room full of ’em, and there may even have been a thriving market in not-entirely-legit sales of liberated machines. But that wasn’t my jam back then: we had Atari STs with FaST BASIC cartridges in the engineering lab, and a couple even had connections to the VAX cluster â€¦ 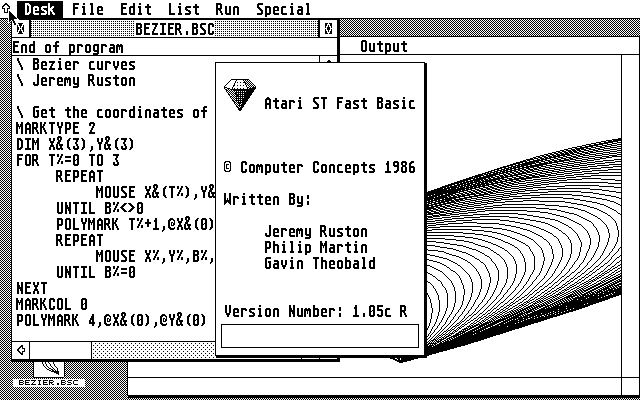 Oh man â€” emulating an Atari ST. It’s 1987, and I’m back in that computer lab on the first floor of the James Weir Building â€¦

(Jeremy Ruston went on to write TiddlyWiki, amongst other things.)