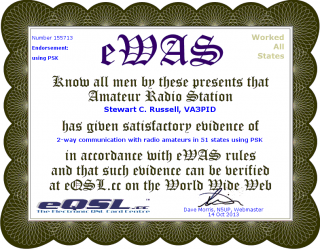 Aw yiss! After more than two years of trying, I finally got a confirmed contact in North Dakota last night. That means I’ve now worked all of the US states using the PSK digital mode. Yay me!

I’d contacted 47/50 within a few months of getting my licence, including Maine. Utah I spoke to in November 2011, South Dakota in January 2012; but the last one, North Dakota, I didn’t pick up until last night. I was just about to turn off the radio for the night when I have 40m a try, and there was Bill (ND0B) calling from Cathay, ND. Sometimes you find what you’re looking for without even trying. Happy Thanksgiving!

So I’ve managed to talk to at least one person in every US state. This is Quite A Big Deal for a new(ish) ham. To be more specific, I’ve done this using one mode – PSK31 – which makes it slightly better nerd-tuned.

But you’re going to just have to take my word for it now. In order to get a certificate, I have to get the 50-ish responds to log their details either on eQSL or ARRL’s Logbook of the World. And this is a bit more difficult.

On eQSL, I’m at 49/50. My lone North Dakotan QSO was from someone mobile from out of state, and eQSL doesn’t handle that well. North Dakota is very sparsely populated, and there’s very seldom anyone on the air from there. Every time I look on PSK Reporter, the emptiness of the state glares at me …

LotW is more of a problem. It says I still have ten more states to go. While it’s a very elegant system, the setup process for LotW is just a bit too complex for most people.

So here are my maps:

I’d like to apologise to Vermont, whose presence is rather noted by its absence from the map. I’m actually surprised that more states ended up with all of their QSOs appearing inside, as:

Absent making a blocky, 8-bit like political map, we’ll have to make do with these failings sometimes.