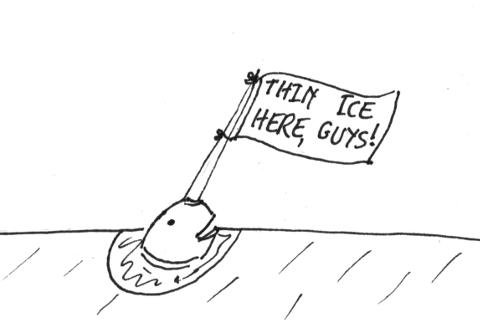 I saw this headline, and couldn’t help myself.

A nice piece of informed snark from Joseph Romm: “How do we really know humans are causing global warming?“.

The Globe‘s Margaret Wente is an effective opinion writer, in that she can get you riled about something without actually adding any valuable comment. Take yesterday’s piece “Yes, Virginia, there is a polar bear” (paywalled, but helpfully parroted by her friends) as a shining example.

In it she makes the following points:

So, Margaret: advocating medieval ignorance, superstition and misery because your “[a]bundant research [uncited, of course; can’t have the taint of intellectual rigour here] shows that experts … are no better than non-experts at making accurate predictions”? More likely, you’ve elevated Prof Armstrong to be your seer. By his argument, then, you are your own sucker.

Instead, consider Advices & Queries 17: “… Avoid hurtful criticism and provocative language. Do not allow the strength of your convictions to betray you into making statements or allegations that are unfair or untrue. Think it possible that you may be mistaken.”