Raspbian is good. If you haven’t upgraded your Raspberry Pi to run it â€” or any other hard float distro â€” then you should. It makes the little board seem positively zippy.

The processor on the Pi is an odd beast. It’s an ARMv6, somewhere between the ARMv5 that the original Debian distro supported, and the ARMv7, which has to have hardware floating point support. The Pi’s processor has floating point in hardware, but it wasn’t supported in the first distribution. Raspbian fixes this, and also has a nice hardware setup wizard (which I wish I’d known about before I spent a while preconfiguring the SD card on another Linux box, grr).

My highly unscientific benchmark of how fast a computer is is encoding an audio file with ‘lame -V2′. If it comes out faster than real time, it’s fast enough. My first trial in late June came out at a dismal 27% real time â€” so that would mean that a 4 minute song would take 14′ 49″ to encode. Very poor. Trying it again with Raspbian today gave me 209% real time â€” so that same song would be done in 1′ 55″. Much better.

While I was fossicking about with the Pi, I switched its power adapter over to a battery-backed outlet on my UPS. With summer storms, our power has been a bit glitchy, and the tiny USB power supply wasn’t able to ride through any of them. This, I hope, will allow me to have an uptime better than the time between storms …

I also made this last week: 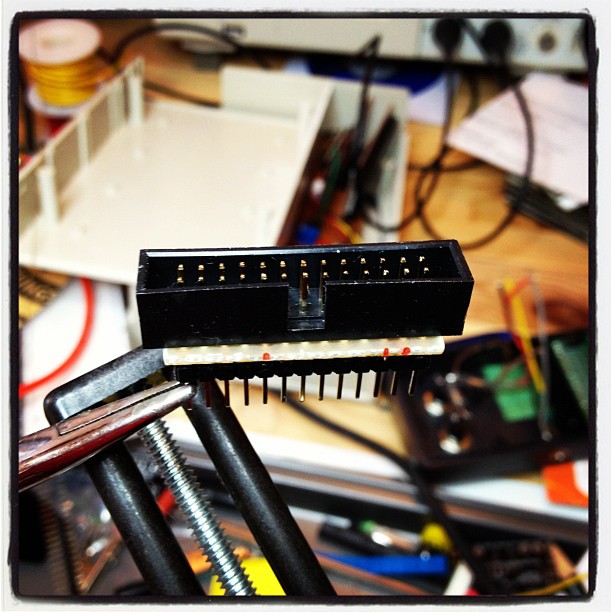 It’s a GPIO breakout, a sort of home made Adafruit Pi Cobbler. It’s on a tiny 13×4 fragment of stripboard. The soldering was fiddly, as stripboard is only single sided, so there was much fine tipped soldering iron action (and swearing). I now have the parts to built Mike Cook’s Breakout board with zener diodes providing protection, but this will do for simple applications if I’m careful.