One of the side effects of Catherine’s Library Quest is that she digs through the sale books. She’s found a library getting rid of National Geographics for 25Â¢. September 1969’s issue, published when I was less than a season old, has a great and hilariously dated article The Coming Revolution in Transportation. It’s all hovercraft and personal transport pods (though none less than the Federal Highways Administration’s The Rambler cautions don’t blame the future when we read this article).

My favourite prognosis from the article is this one, on electric cars:

Electric cars should be common within a decade. They will be “pure” electrics, if batteries become lighter, more powerful, and longer lasting; otherwise, “dual-mode” vehiclesâ€”battery-powered in town but propelled by gasoline engines on cross-country trips.

It took just a little longer than this, and it sure wasn’t GM who brought the first ones to market, despite this picture of a hybrid Opel from 1969: 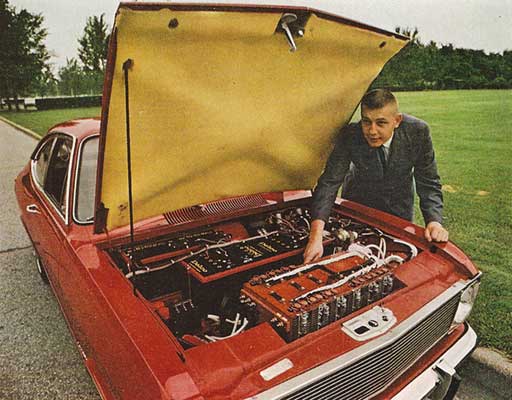