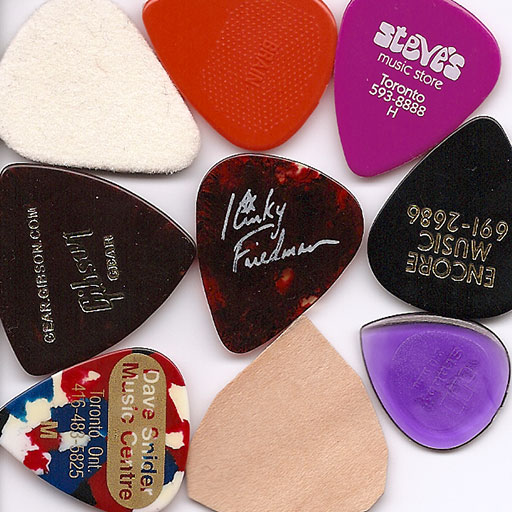 Just a few of the guitar picks I’ve tried (though the one at the top is a felt uke pick). I got a bunch of Fender celluloid picks at The 12th Fret today, and they could be good. The huge one at the bottom is indeed homemade, made from two sheets of wood veneer laminated together with the grain offset 90°.

We went to see Kinky Friedman in Glasgow around 1997 or ’98. Kinky was, as usual, handing out his lucky guitar picks, saying that something good would happen to the bearer of a pick within 24 hours of receipt.

The next day, Catherine and I went off to Edinburgh. We were talking as we negotiated the walkway up to Queen Station, and I failed to notice a bollard which caused me, um — let’s just say that this is the first (and I hope last) time on this blog that I use the term scrotal bruising.

Catherine, noticing my sudden lack of conversation (and probable emission of strained ffffffffff!! noises) thought I was mad at her, so wouldn’t talk to me for the start of the train journey. Once I regained the power of speech (somewhere around Bishopbriggs), I explained my predicament, and she understood.

But Kinkster, I want my money back on that pick …