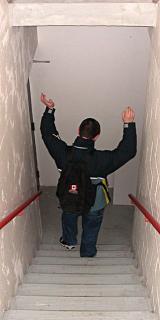 Norvin doesn’t work for OANDA any more. We’ll miss him.

scruss.com and eitzen.labs today announced the release of the DNX-1000 Hardware /dev/null Accelerator. Utilizing state-of-the-art FPGA technology and supplied as a PCI card, it is claimed that the card has been benchmarked at up to 1,000,000× faster than the software /dev/null device provided in the Linux 2.4.20 kernel.

Targeted at the enterprise user, the DNX-1000 is reported to meet the needs of the most demanding bit-bucket user. No longer will power users be penalised for throwing out large quantities of data, says eitzen.labs CTO, Norvin Eitzen.

It’s a real milestone, adds scruss.com COO, Stewart Russell. Most /dev/null implementations require date to be pushed at them, but our patented ElectronVacuum™ technology actively sucks the data from your system.

Both Eitzen & Russell declined to comment on reports from beta testers that the card appeared to delete random files from their system. They categorically denied that the disappearance of one of the alpha tester’s chinchillas was in any way related to the DNX-1000.