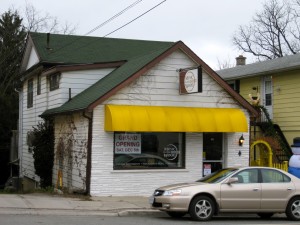 I trekked out to Music In The Wood, the music shop in Rockwood that’s just been opened by Hugh, Wendi and Mac Hunter. It’s a nice drive out there, certainly once you’re past the 407/401 mess. Norval, Georgetown and Acton still have some small-town charm amidst the stripmalls.

It seems I had a lucky escape, as Bill Rickard was to be bringing in some of his much discussed Dobson banjo kits. Had he been there, I would have bought one on the spot. The price is fantastic, and y’know, I really need a fretless …

All of Hugh’s banjos were sold, but he had five of Bill’s in the store. Two of them were the gorgeous spun-over rim types, a kind which hasn’t been made properly in the last century or so, until Bill started last year. 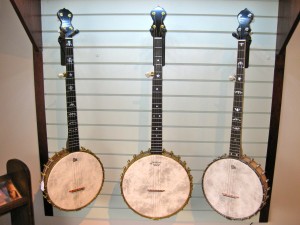 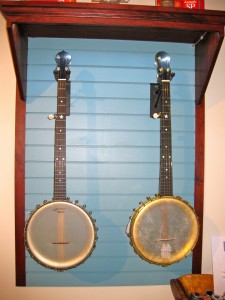 The grand opening of the shop isn’t until next Saturday. I can’t make it, alas.