I’m pretty amazed that the above image is even vaguely readable. It’s Hellschreiber, generated by Anthony K3NG Good’s Arduino CW Keyer. What you’re seeing, though, is Hellschreiber from the keyer’s sidetone generator being fed through a piezo glued to a paper cup (and not just any paper cup) being picked up by Fldigi on my laptop’s microphone. This isn’t what you’d call a quality signal path, and it’s a tribute to the mode’s robustness that it can be made out at all.

Anthony has packed an absurd amount into this keyer. There isn’t enough memory on a stock 32K Arduino for all the features to be enabled. I’m planning to use it as a CW keyer alongside Fldigi as the decoder. Despite all the features that can be built in, I’d just be using it as a serial to Morse converter, with perhaps a couple of memory keys for calling CQ and the like.

I can’t breadboard for toffee. 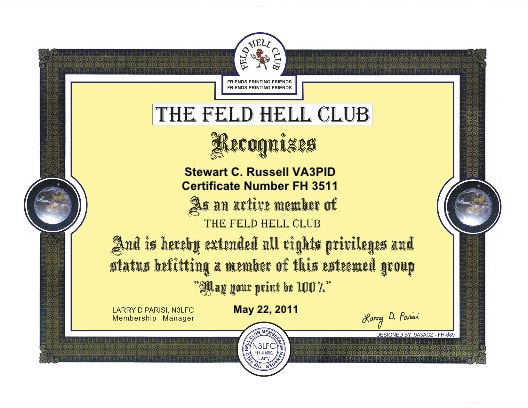 Hey! I’m a member of the Feld Hell Club!