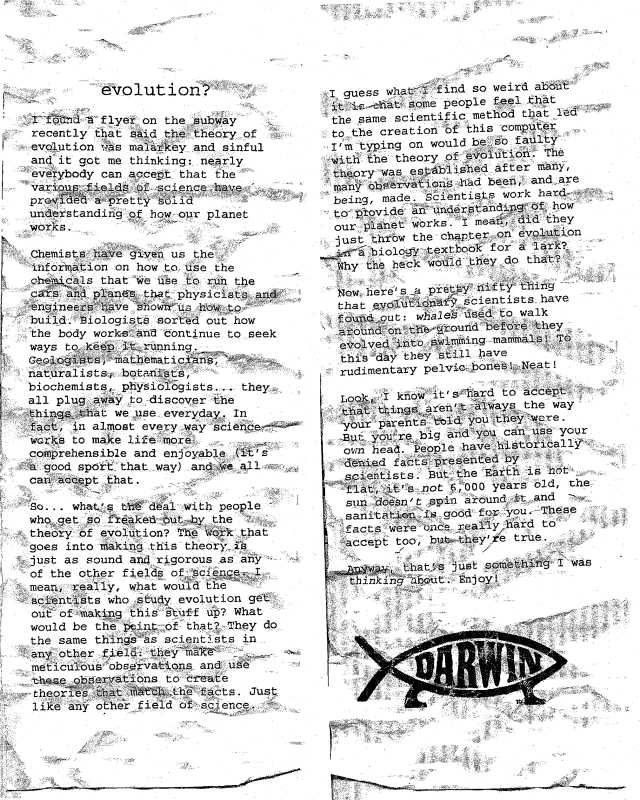 I found a flyer on the subway recently that said the theory of evolution was malarkey and sinful and it got me thinking: nearly everybody can accept that the various fields of science have provided a pretty solid understanding of how our planet works.

Chemists have given us the information on how to use the chemicals that we use to run the cars and planes that physicists and engineers have shown us how to build. Biologists sorted out how the body works and continue to seek ways to keep it running. Geologists, mathematicians, naturalists, botanists, biochemists, physiologists… they all plug away to discover the things that we use everyday. In fact, in almost every way science works to make life more comprehensible and enjoyable (it’s a good sport that way) and we all can accept that.

So… what’s the deal with people who get so freaked out by the theory of evolution? The work that goes into making this theory is just as sound and rigorous as any of the other fields of science. I mean, really, what would the scientists who study evolution get out of making this stuff up? What would be the point of that? They do the same things as scientists in any other field: they make meticulous observations and use these observations to create theories that match the facts. Just like any other field of science.

I guess what I find so weird about it is that some people feel that the same scientific method that led to the creation of this computer I’m typing on would be so faulty with the theory of evolution. The theory was established after many, many observations had been, and are being, made. Scientists work hard to provide an understanding of how our planet works. I mean, did they just throw the chapter on evolution in a biology textbook for a lark? Why the heck would they do that?

Now here’s a pretty nifty thing that evolutionary scientists have found out: whales used to walk around on the ground before they evolved into swimming mammals! To this day they still have rudimentary pelvic bones! Neat!

Look, I know it’s hard to accept that things aren’t always the way your parents told you they were. But you’re big and you can use your own head. People have historically denied facts presented by scientists. But the Earth is not flat, it’s not 6,000 years old, the sun doesn’t spin around it and sanitation is good for you. These facts were once really hard to accept too, but they’re true.

Anyway, that’s just something I was thinking about. Enjoy!