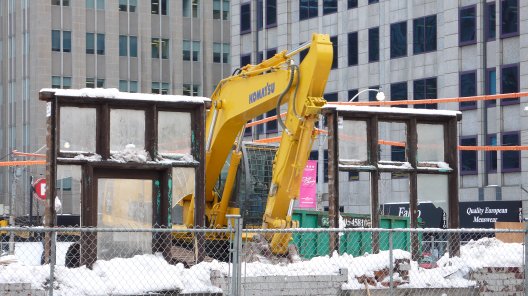 Two windows are pretty much all that’s left standing at Bishop’s Block, which was one of the oldest buildings in Toronto. It would seem that the façade is being kept for the new Shangri-la bourge hut, but the way the workers have been wrecking old bricks, it would be a surprise if much of the outer wall can be rebuilt. 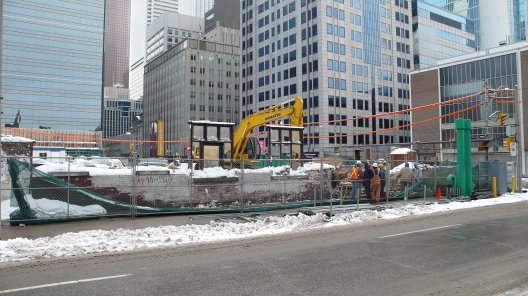 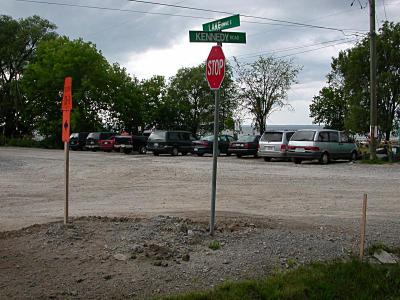 (yes, there was an enormous storm coming in …)

If you live in Scarborough, Kennedy Road is yet another line of stripmalls and furniture shops. But if you look at its route on a map, you’ll see that it runs from Lake Ontario to Lake Simcoe, through some beautiful countryside.

Since we don’t have a car, and I only recently got a licence, we haven’t been out of the city much. We need to drive somewhere west of Hamilton today, so for practice yesterday, I drove all of Kennedy Road.

Since I know quite how horrible the road is south of Steeles (the Toronto boundary), we kept on Birchmount until we hit the city limit, then headed north on Kennedy through Markham. Things remained fairly unimpressive until we got out of Markham, and passed through Whitchurch-Stouffville and up through the Oak Ridges Moraine. This bit’s beautiful.

Kennedy Road ends as an unpaved road at the edge of Lake Simcoe. Its northern section is so green that you can almost forget the horrors that run through Scarborough. We came back down Warden — another road with similar urban delights to Kennedy — and found it to be just as attractive.