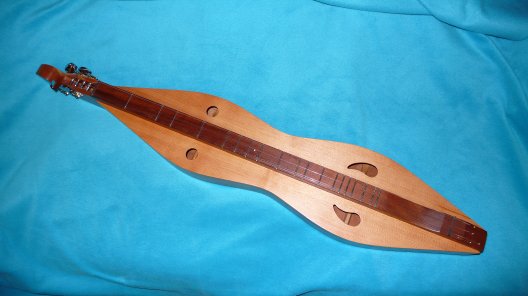 I bought an Appalachian dulcimer yesterday. It’s beautifully made by Peter Cox of Waubaushene, Ontario. The top is a slab of old pine that was originally a rafter in an old farmhouse.
Despite its initial unusual appearance (played on the lap, modal frets, four strings – two of which are in unison – tuned ddAD), it’s extremely hard to make an unpleasant noise with one. Part of its charm is that it’s very quiet (so only those nearby are annoyed – and since Catherine‘s away …), but you can also pick out simple tunes easily. Less than a day after getting it, I’d picked out a recognizable version Speed of Things, my favourite-ever Robyn Hitchcock song.

Peter recommended the book In Search of the Wild Dulcimer, which I’ve discovered is available online from the author’s site.

One reply on “Just don’t call me a damsel, okay?”

[…] reunion Took my dulcimer back off consignment from Jeff Menzies, and you know what? I’m going to keep it. It’s […]