I hope they still have pancakes at the Chateau Lacombe, for today is their day. Bet they won’t have the one true topping, being sugar and lemon juice. 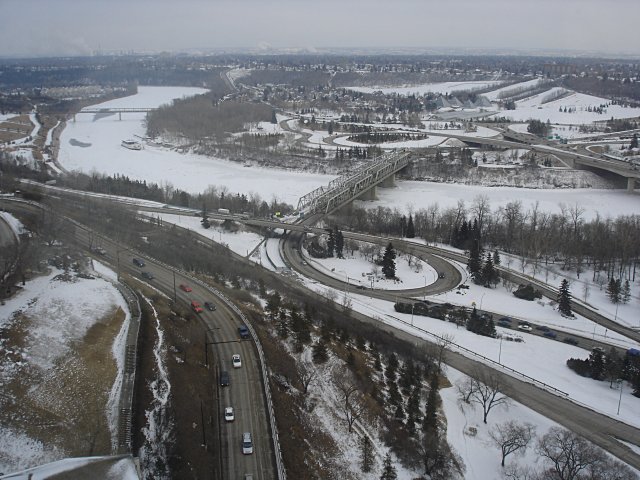 Jet lag, lack of sleep, and a whole day of company orientation isn’t doing much for my clarity of thought right now. What I need is steak and beer.

Last night’s flight was supposed to get in at 10:30, but what with WestJet‘s faffing around, we got in well after midnight. It was about 1am (or 03:00, Toronto time) before I got settled in the hotel room.

I’ve never been in a city with trolley buses before. Guess I can’t say that any more. It’s also the furthest west I’ve ever been.
I wonder if the snow drawing below (as seen from my hotel window) is supposed to be a hometown homage to Bob The Angry Flower?

They’ve just discontinued my razor of choice — the Wilkinson Sword/Schick Diamond — so I’ve decided to go old-school. Now that Wilkinson Sword has the four-blade Quattro, and Gillette their five-bladed monstrosity, I’ve realised that the whole multi-blade thing is a load of hooey.

Consider this: if the first blade was supposed to do most of the work, then draw the hair out a bit to be cut below the skin level, further blades would have less and less effect. It’s just as likely that the whole multi-blade cartridge thing was a scam to sell more, and non-standard, blades that could easily be made obsolescent by the time generic manufacturers caught on —  the old Instamatic effect.

So I bought a Merkur safety razor (from Toronto Salon Supply, at Bay and Dundas), and a bunch of Merkur blades. I didn’t shave particularly close today, but it’s just as close a shave as the old twin-blader I used to use.

The plus side is that I’m throwing away no plastic with every blade, so I’m shaving the planet.

There was supposed to be a picture of a nice — if low-res and a bit squinty — sunset over McLean’s Mountain on Manitoulin Island here, but 1&1’s webmail isn’t too good on attachments.

Update: Here it is:— 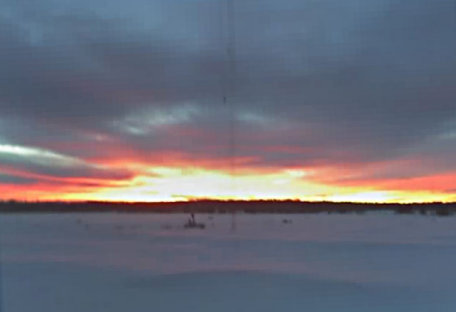 I was stranded in London (Ontario, that is) last week due to a fuel pump failure in an elderly Subaru. Looking for some breakfast, I followed my nose to the most amazing smell of fruit pastries.

… and wound up next to the Kellogg’s factory. I suspect Pop Tarts. A low trick.

A yellow Chevrolet Corvette soft-top was having a really hard time going up Kennedy Road this morning. It was moving no faster than walking pace, and the back end was fishtailing out at every possible opportunity.

The mini-mall burned last night. Looks like the centre of the fire was the gift shop in the middle of the block. The rest of the block is pretty badly damaged, though. It looks like the place will have to be rebuilt — or replaced with a condo block, which seems to be the fate of shops in Scarborough.

One forgets how quickly — and how extravagantly — a carved pumpkin goes mouldy. It’s positively fluffy. 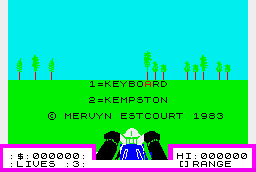 Perhaps the best game ever: 3D Death Chase. It helps if you play it at the full speed your computer allows 😉

I tried copying about 180MB of files from my old Thinkpad onto a USB key using the mini-ITX box last night. It’s supposed to have USB 2.0 High Speed, but it certainly hasn’t; it took several hours. It managed a little over 5 Kbytes/s on a single file.

By comparison, the iBook moved the same amount of data from the key to the desktop in under four minutes. That’s more like it.

I wonder what could make the mini-ITX box so slow? As far as I can tell, there are no USB1.1 devices on the bus. Unless the device was mounted ‘sync’ (where every write isn’t buffered, but immediately written to the USB key), it’s a mystery. 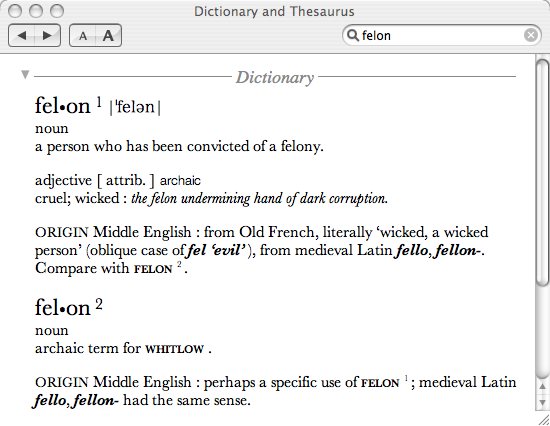 I was pleased to see that Apple had included a comprehensive dictionary with OS X 10.4. The Oxford American is a decent enough reference tome, and the computer implementation isn’t bad at all.

The typography’s fairly clean, if rather heavy on the whitespace. Cross references are active; if one clicks on the small-caps word whitlow, you’ll go to its definition (if you have to; it’s kinda nasty). For some reason, the Dashboard version of the dictionary doesn’t have active xrefs.

Searching isn’t as good as it could be. As with most electronic products, it assumes you already know how to spell the word. The incremental search does allow that, as long as you have the first few letters right, the list of possible choices is quite small. Like all electronic dictionaries that I’ve seen, it’s not possible to browse the text in that spectacularly non-linear way that makes a real paper dictionary fun.

It does seem to have a good few Canadian terms, but a true Canadian dictionary should be shipped with Canadian Tiger. Correct spelling isn’t just optional. It also only labels British and Canadian spellings as ‘British’.

So, in summary, pretty good, but far from perfect.

I like animation more than Catherine does, so last night while she was teaching, I rented Harvie Krumpet. It’s a series of shorts by Australian animator Adam Elliot. All of them are poignantly strange. The main feature follows Harvie from his birth in Poland in the 1920s to his dotage in Australia. Bad things happen to him, but he abides.

If you can imagine Wallace & Gromit on mogadon, and imagine liking it, you’ll know how I feel about Adam Elliot’s work.