When I was first involved in the industry in Ontario, every developer had a monitoring tower in Sudbury. Sudbury was going to be the wind energy capital of Canada. And then, suddenly, it wasn’t.

This is a half-remembered summary of a talk given by Jim Salmon at CanWEA 2009. I’m sure I’m missing bits, but the proceedings will come out eventually.

The first wind map of Canada, published in the early 1990s, showed phenomenal wind speeds over Sudbury. We’re talking wind-over-open-water speeds. The weather station at Sudbury airport could pretty much have been a wind farm.

Sudbury, for those that don’t know, is the centre of Ontario’s nickel mining. The city used to be ringed by huge smelters that pretty much did for any trees growing in the area. Sudbury was often described as a moonscape; NASA was rumoured to have trained there for moon landings. The landscape was barren and rocky in summer, and snow covered in winter. You can still see the effect (in satellite photos, at least) around Wawa, where the smelters have carved a huge plume in the trees.

One of the factors that affects wind speed in a location is surface roughness. The smoother the ground, the less the wind is slowed down by it. That’s why we’ve been working on offshore wind; water’s good and smooth.

So, back to Sudbury wind speeds. When wind energy developers first put towers up there in the late 1990s, the results were disappointing. When the measured wind speeds were compared to the current values from local weather stations, they seemed to correspond – but were much lower than the long-term record.

Here’s a quick and dirty graph, derived from Canada’s National Climate Archive data for all the Septembers from 1959 to 2008: 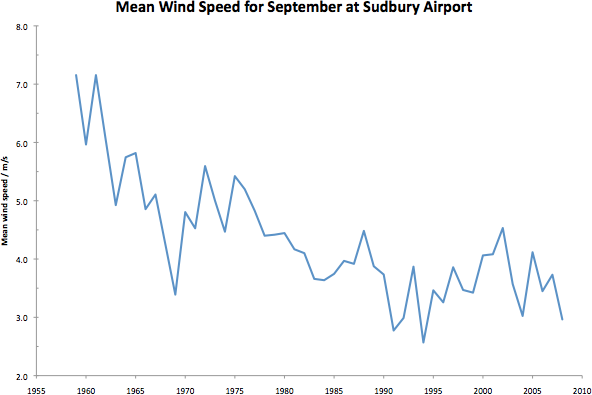 (there’s no particularly good reason for me to have chosen September, except that it saved me downloading 12x as much data from the MSC website.)

The trend is clearly down. There are two likely linked causes:

(Jim’s presentation also included a section on how a lake near Sudbury was seen to be cooling over the years. The explanation was that, with reduced wind speeds, water mixing was reduced, so the cold water at the bottom stayed in its layers instead of being moved up to the surface and warmed.)