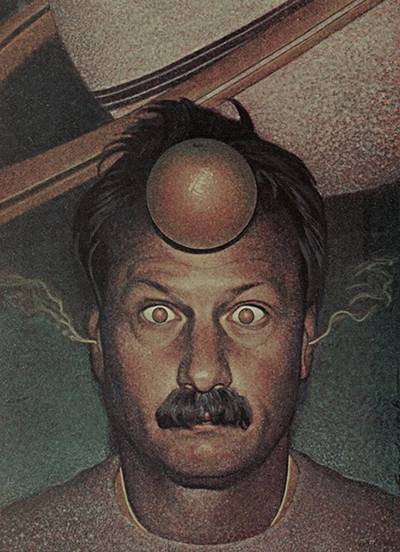 â€œA what?â€ said Tim Donaldson, the mining foreman of Xerxes 8, a mineral-rich planet on the far side of the Milky Way.

â€œA Shibboleth,â€ repeated Harvey Wheeler. â€œA way to determine the identity of the enemy sooner than we do now.â€

Donaldson and the rest of the group stared at him blankly. The old man, Freiberg, leaned forward on his cane, as if to speak, but then he sat back quietly. The 20 others, like Donaldson, mostly uneducated miners, began to look at the floor, not wishing to show their ignorance.

Only 13-year-old Bobby Hall, whose parents had left him with Wheeler while they visited his ill grandmother on Sagis, had the courage to ask: â€œHow does a Shibboleth work? What’s it look like?â€

Wheeler, the planet’s Intelligence Technician, smiled. He had often felt useless since coming to this planet. The mining colony put high value on muscles, not brains. Now he had a chance to show his strength. â€˜A Shibboleth isn’t a physical thing,â€ Wheeler said, â€œIt’s a word, a password.â€

â€œSo what kind of password?â€ Bobby asked. â€œA secret one?â€ â€œSecret passwords don’t work,â€ groaned Donaldson as he paced the cramped underground chamber where the final human survivors of Xerxes 8 had gathered. â€œYou know the Ardon robotoids can tune in on all our conversations and radio communications. Our â€˜secret passwordâ€™ wouldn’t stay secret for 10 seconds!â€

â€œJust a minute, Donaldson,â€ the elderly Freiberg spoke up. â€œIf I remember my Bible stories correctly, a shibboleth is not that kind of password.â€

â€œThat’s right,â€ said Wheeler. â€œThe term comes from the Bible, and a shibboleth isn’t secret. It just can’t be pronounced or understood by the enemy.â€

Freiberg looked at Wheeler and then about the room. Everyone listened intently, knowing that the story could decide whether they lived or died.

â€œWell,â€ Freiberg began, â€œin the early days of the kingdom of Israel, back on Earth, a battle occurred between two tribes. But it was hard for the tribes to tell each other apart, because they looked, dressed and talked alike. Then one tribe discovered that it could identify the enemy by asking each captured member to say a certain word. You see, because a distinct sound was missing in the speech of the one tribe, its people couldn’t say certain words, like â€¦ like â€¦ shibboleth. They instead said â€˜sibboleth.â€™â€

â€œSo you think this will work with the robotoids?â€ spat Donaldson. â€œNonsense! The robotoids slip in among us and replace us. Like those tribes, we can’t tell them apart from us, Why? Because of their programming. They can mimic us perfectly. They could even be among us right now.â€

Freiberg, the mining company’s bookkeeper, shook his finger disapprovingly. â€œLook, Donaldson, they haven’t beaten us until our reason gives way to fear.â€

Donaldson made a vocal noise of disdain and folded his arms angrily.

â€œFreiberg’s right,â€ Wheeler said. â€œThe robotoids can slip in and replace any of us, but as long as one of us is still human, we must struggle to survive.â€

â€œBut, Mr. Wheeler,â€ said Bobby, â€œMr. Donaldson is right in a way too, The robotoids are programmed to be perfect. There aren’t any words in any language that they can’t say.â€

Neither Wheeler nor Freiberg spoke.

â€œAbsolutely,â€ Donaldson added darkly. â€œThey know every language, every tone, every word. They even pick up slang quicklyâ€”â€

A miner stood so quickly that his chair fell over.

â€œMe too,â€ cried a man behind him. â€œI don’t want to die! But I’ve worked with robotoids and know that they won’t give up!â€

â€œThat’s it,â€ Freiberg exclaimed. â€œThey do have a flaw. Think about it. They’ve been programmed to avoid being trapped by unsolvable puzzles. But to do exactly that, they’re also been programmed to never give up in other areasâ€”like linguistics.â€

â€œRight,â€ Wheeler said brightly. Then his enthusiasm died. â€œBut how does that help us? That’s why slang words and made-up words won’t fool them. They just add to their memory banks, searching them until the problem is solved.â€

â€œOh, things like asking a robotoids math or philosophy questions that have no answers,â€ Freiberg explained. â€œAsk a human for the last digit of pi, and he’ll admit he can’t find it because it’s somewhere in infinity.â€

â€œYears ago,â€ he continued, turning to the miners, â€œour soldiers could uncover a robotoid with such a question, literally make smoke come out its ears as the circuits burned up searching for the answers. Then they were reprogrammed to accept failure, so today a robotoid will laugh off such a challenge.â€

Wheeler brightened. â€œBut, as you said, they still won’t accept failure in certain areas, like language. Soâ€¦ we could try some other branch of linguistics, likeâ€¦ spelling! We can feed ’em words that have silent letters.â€

â€œAs Mr. Wheeler said,â€ Freiberg answered, â€œeach would work only once. We need something to make a robotoid’s â€˜brainâ€™ go into a closed loop. Something that would force it to search for an answer until it actually burned up its circuits.â€

â€œHow about a rhyme?â€ Bobby suggested.

â€œNo, Bobby,â€ said Wheeler, â€œI’m afraid a rhyme would be a bit too simple. A robotoid would come up with countless rhymes for every word that â€¦â€

â€œBut what if the word doesn’t have a perfect rhyme?â€ Bobby persisted.

â€œWhat a bunch of hopeless fools!â€ Donaldson shouted. â€œWe’re on the verge of extinction. The robotoids are picking us off one by one. They’re closing in every minute. We’re cut off from everyone else in the galaxy, and we sit here dreaming about a magic word, listening to a child.â€

Freiberg inhaled deeply. â€œMr. Donaldson, first of all, we are neither fools nor hopeless. We are alive, and we are thinking. That’s two advantages we have over the robotoids. It’s also the key to survival. Secondly, Bobby is in as much danger as the rest of us. That fact gives him certain rights.â€

Donaldson mumbled something and moved away, but most of the miners nodded, agreeing with Freiberg.

â€œWell,â€ Bobby began, â€œI’m not sure about other languages, but I remember learning that in English there’s no word that rhymes with â€˜orange.â€™â€

Wheeler rubbed his chin. â€œâ€˜Orangeâ€™ as a shibboleth?â€ He looked at Freiberg. â€œCan you think of a rhyme with â€˜orangeâ€™?â€

â€œCan you think of one, Donaldson?â€ Wheeler asked, turning to face the mining foreman.

Smoke was coming out of his ears.