The rig I was looking at — the Yaesu FT-8900R — appeared to be considerably cheaper than all the other multi-band units. It appears that it’s FM only, which is rarely used on the HF bands. The considerably more expensive FT-857D is the cheapest unit that will do 10m/6m/2m/70cm, which I reckon is pretty much where my interest lies.

I just got my amateur radio license. If you’re unlucky enough to be on the 2m and 70cm bands around Toronto, you may just find me as VA3PID. The 3 is, of course, silent …

I guess that (so far unsuccessfully) futzing around with the small digital transceivers with Arduino made me look up some radio things, then I read this article on MetaFilter. It made me realize that unless new hams get on the air, the hobby will die, and the radio spectrum will be reallocated.

Passing the test wasn’t that hard, but did take a bit of dedicated reading. No morse code is required for the Basic Amateur Radio Operator Certificate, and if you get more than 80% in the multiple choice test, you can use the HF frequencies below 30 MHz. Since the pass mark is 70%, I thought it worth the extra effort.

I slightly overbought on the study materials. I got:

While it’s possible to download the question bank from Industry Canada, or use the quaint Windows-based examiner program, I thought I’d work from a book. Both will likely do pretty well, but neither is perfect:

I passed the exam on Tuesday night, and had my callsign listed by Friday. I have a cheap but adequate Wouxun dual band HT. This should be fun.

CBC Bandwidth had a good show yesterday on the many banjo players and styles in Ontario. It features, amongst others: Jayme Stone, Jeff Menzies, Chris Coole, Chris Quinn, the Foggy Hogtown Boys, Andrea Simms-Karp, the Barmitzvah Brothers, Jenny Whiteley, Sheesham and Lotus, Feist and Elliott Brood.

There’s a faint click in some of the audio (I always seem to get it from CBC’s streams), but it’s not too noticeable.

I think I can safely say that this household knows more about Edmund Gosse than any other in Scarborough. Catherine‘s PhD was based on on the Gosse family, and I’ve read the book and proof-read the thesis. I suspect we’re also the only household in Scarborough that relates episodes from the young life of Edmund Gosse as if they were family anecdotes. 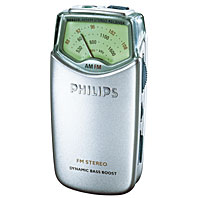 I found my little Philips pocket radio again today. I bought it on the 11th of September 2001, when radio was the only news medium I could get to that wasn’t overloaded.

On FM stations, it sounds incredibly clear and sharp. But switch it to AM and detune it a little, and the world becomes a whole new electronic soundscape. Walk by a fluorescent light, and feel the massive fat buzz. A pocket calculator chitters away like an old adding machine. Luminescent panel displays chirp like crickets, wall-warts hum in harmony. My CD player is a waterfall, my mobile phone a galloping horse.

But my computer is a totally different world. [Not so] bright antennae (on the wireless router) bristle with the energy. The printer is an angry beast, howling away even when it’s idle. But the CPU box just drowns everything else out in flat white noise. Nothing else competes.

And all this I found in a quiet little house in Scarborough. I wonder what the rest of the world sounds like?